Primed for Risk On?

“The President is ordering you not to raise interest rates”

That’s what President Reagan’s Chief of Staff Jim Baker said to Fed Chair Paul Volcker in the summer of 1984.  If the Gipper can issue an order like that, is it inconceivable that the current WH would issue a similar statement?

The failing NYTs ran an article on Volcker this week ahead of his memoir’s publishing next month.  While that quote might be the headline grabber, one of Volcker’s key messages was that the Fed shouldn’t be targeting 2.0%.  That number, according to him, is totally arbitrary.  The Fed should seek price stability and acknowledge that target changes as the economy swings.

“Two percent inflation isn’t going to kill us. Even 2.3 percent for a few months won’t necessarily send us into the dungeon,” he said, “But be careful of 2.3 percent being ok and then they say let’s let it go to 3 percent.”

Sounds like Volcker is worried about a slippery slope.  But with inflation leveling off and potentially even receding, that concern may be premature.  Markets are more focused on the Fed lowering the trajectory of rate hikes after the recent sell off in equities.

Time to dust off the ole Fed Vicious Cycle graph. 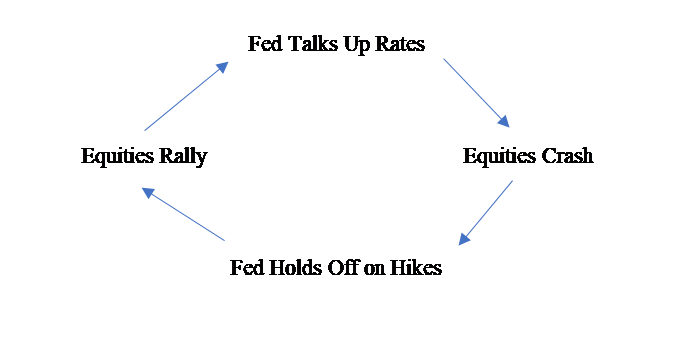 At some point between a 10%-15% stock market correction, the Fed traditionally holds off on additional hikes as it monitors the situation.  But with monetary policy still comfortably within the accommodation camp, I’m not sure the Fed will be so quick to react.

But…if stocks continue to slide and trade war tensions heat up, even Powell may have to change his hawkish tone.

More likely in our minds over the next month is general leveling off in equities, Powell publicly acknowledging the heightened risks while not formally changing policy, and a Fed committed to nimble monetary policy.

Time for Risk On?

One of our favorite research departments is French banking behemoth BNP Paribas.  They publish a risk index that attempts to highlight extreme risk appetite swings.  In the graph below, the higher the value of the index, the more overly cautious the market is being and it may be time to add risk. 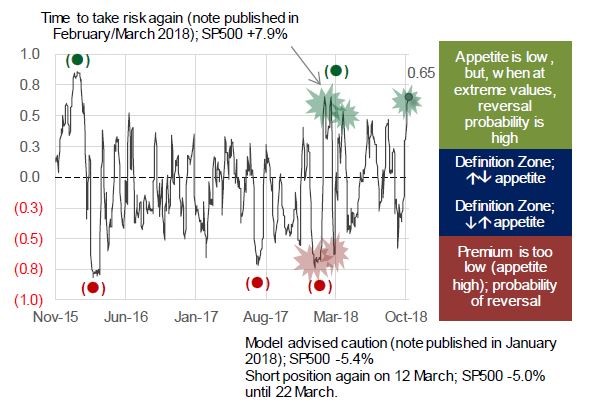 The index line swings wildly in part because the market is constantly searching for equilibrium.  A month ago, the market was underpricing risk, but following the recent correction, it is overpricing risk.  It doesn’t take long for the market to overreact and swing from one extreme to the other.

From a rate standpoint, this suggests the flight to safety has been overdone and we may see some more upward pressure on yields now that at least some of the massive shorts have covered.

Remember this massive we’ve been using to highlight the massive short position on 10yr rates?  Well, the weak inflation report may have caused a lot of them to toss in the towel and push rates lower.  This report is updated on Tuesdays, so it will be interesting to see how it looks this week. 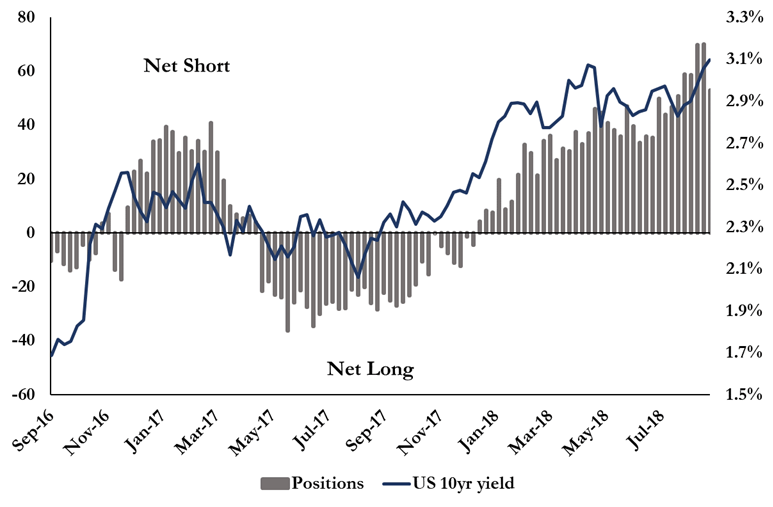 Also, some of the traders we spoke with believed the drop in rates was exacerbated by algorithm short covering.  For the state schoolers like me, a coder writes a short covering trigger like this

Complex stuff, I know.  But the general idea is that lower inflation translates into lower long term rates.

Here’s the kicker – over a long enough timeline, fewer rate hikes will likely push up 10yr rates as long as GDP continues to do well.  The market will rejoice at the Fed not pushing us into a recession and be willing to take riskier positions.  But that is more of a long term play.  In the short term, the market swings aggressively as traders throw in the towel on negative carry position.

The fact that the 10T fell to 3.06% but not any lower is also telling.  That level is a very critical level and will likely need require a catalyst to breach it.

In other words, if you’re close to locking in a rate and wondering if the T10 will push lower to the 2.90%’s…it could.  But only if something like weak inflation or a change in Fed-speak causes it to.

Far too many attempts at Halloween jokes on CNBC, probably talking about spooky markets.

And Boston gets to celebrate another championship.  I remember when the city was known for clam chowda and not its umpteenth title.