But it accomplished what Powell hoped – the market backing out a hike it had priced into 2023.  Like we said last week, don’t fight the Fed.

Core PCE, the Fed’s preferred measure of inflation, came in slightly below expectations at 2.3%.  Powell’s belief that inflation this year will be transitory is based largely on how much it has struggled to consistently break through 2.0%.

At the FOMC meeting last week, Powell said it is not yet the time to begin discussing tapering of bond purchases.  A few days later, Dallas Fed President Kaplan disagreed.

My money is on the August Jackson Hole gathering for the first public comments about tapering, at least by Powell.

Big labor report due Friday.  Last month, you may recall that the economy added more than 900k jobs vs the forecasted 600k.

Economists have adjusted expectations and are forecasting 968k jobs added and a 5.7% unemployment rate on Friday.  Powell said he would like to see a “string” of incredibly strong reports before the Fed would start considering tapering (not hiking rates).

That’s what makes Friday’s report so interesting.  If the report shows more than 1mm jobs added last month, the market may conclude Powell will have to consider tapering earlier.  Rates climb.

Paradoxically, if the number is too strong, the market may fear it will cause the Fed to remove accommodation too early and there could be a flight to safety.  Rates fall.

The market wants a goldilocks number.  This is why traders get paid the big bucks.

Two weeks ago, after the 10T had pushed back below 1.62%, we theorized that it was a temporary short-covering and that eventually the market would start loading up again.  It was like pressing the reset button.

The Citi Surprise Index measures how far from expectations does actual data come in.  As you can see below, data continues to surprise to the upside.  This is a big reason why markets keep piling into short positions.

But…as expectations catch up to reality (eg, 900k jobs report), there becomes a greater likelihood that data will “disappoint,” even if it’s still strong.

I continue to believe there is some risk that rates fall if reality fails to live up to the “everything going perfectly” expectations the market has priced in.

Bloomberg Rates team (who you should listen to instead of me) is still calling for a 2.30% 10 Year Treasury by year end. 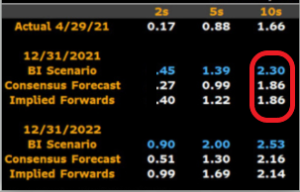 Friday’s job report will be the big headline data point for the week.  Tom Donohoe might be showing up in next month’s unemployed numbers following his dustup with Howie.

I think rate swings will be muted until Friday’s report, with a possible exception being Wednesday’s ADP report.  Markets use that as a leading indicator to the real report, even though time and time again it has been demonstrated to have no correlation.