Russian Invasion Impact on US Rates

Will the Russian Invasion Impact US Rates?

Follow me at #rateguy for more life hacks.  Have a good week.  Ugh, fine, I’ll dig in a bit more.

The impact is likely to be limited unless Putin keeps ratcheting up the nuclear talk.  That could change if the scope of the invasion changes, Biden starts talking about US troops on the ground, or if China decides this would be a good time to do the same with Taiwan.  The US is more isolated from the impact of the invasion than Europe, who will directly feel the impact of oil and gas supply.

The biggest impact is likely to be a general dampening on rate hike expectations.  I don’t think a 50bps hike in two weeks was ever on the table, but the invasion caused the market to drop those odds from 50% to less than 5%.  This could help cap prices if volatility can settle down, but that usually takes a little bit of time.

What does this mean?  That the market is skeptical the Fed can hike without pushing us into another recession.

Given how significant an inverted curve is to the market, the Fed could be faced with a difficult decision this year.

Remember, we don’t need an inversion to have a recession.  But if the curve inverts, we always have a recession…and usually about 18 months later (Pensford Inverted Yield Curve Study).

I don’t think it will come to that this year.  I think the market will (like it always does) realize the economy can withstand hikes and the 10T will climb, helping avoid an inversion.  Bloomberg’s rate team put out an interesting analysis that suggests the 10T will likely peak between 2.20%-2.43% this cycle, which could help avoid an inversion in 2022.

But sooner or later, the Fed will probably overdo it and hikes us into the next recession.

From the Department of Piling On, the Russian invasion will likely extend the inflationary pressures from supply chain disruptions.  With Russia accounting for 11% of global oil supply, prices could break $100/barrel for the first time since 2014 and are likely to remain above $90/barrel for several months.

The good news is that inflation likely peaked this month, but the cooling off will probably take longer.  Here’s the Wells forecast for inflation over the next two years. 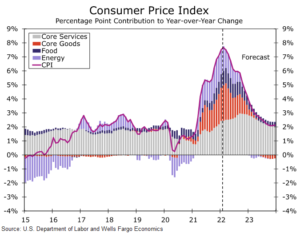 That 6.0% expectation is exactly why the Fed did an about face on hikes.  Expectations were running away.  They needed to beat the drum on hikes to reign in expectations.  Guess what? It worked.  Expectations started easing this month (that little baby dip to 5.8% on the right side of the graph).

Perhaps more importantly, inflation expectations further into the future are within acceptable tolerances.  Here’s the same graph, but with 3yr forward and 5yr forward expectations.  This graph is a big reason why the 10T isn’t higher- the market believes inflation is a near term problem, not a long-term structural shift.

I think there’s a chance the recent Fed-speak has been saber-rattling to drive down expectations and the Russian invasion will minimally impact Fed policy.

Powell speaks publicly for the first time since the last FOMC meeting when his hawkish comments caught the market off guard.

Friday brings the next jobs report.

And obviously developments in Ukraine will continue to dominate headlines.