Dramatically shortened week with Thanksgiving.  Liquidity will start drying up Wednesday at lunch time, which won’t prevent trades from getting done but may cost a bit more to execute during that window.

Markets are closed on Thursday.

Friday markets are open until 2pm, but liquidity will be poor with all traders with more than two years’ experience taking a four-day weekend.

Consumer spending drives about two thirds of GDP and has been surprisingly resilient this year.  Contrast that with business investment, which has fallen off a cliff.  Here’s a graph from a Bloomberg article this week illustrating the divergent paths.

When the Fed mentions downside risks, consumer spending has to be near the top of that list.  If consumer spending takes a turn for the worse, more rate cuts are on the table.  If not, the Fed could be rightly proud of itself for achieving the ever-elusive soft landing.

Consumers weathered the storm in 2016 despite a drop off in business investment, and that likely prevented the US from dropping into a recession.  Consumers very well decide how 2020 goes because it’s clear that businesses have altered their behavior this year in anticipation of a slowdown. 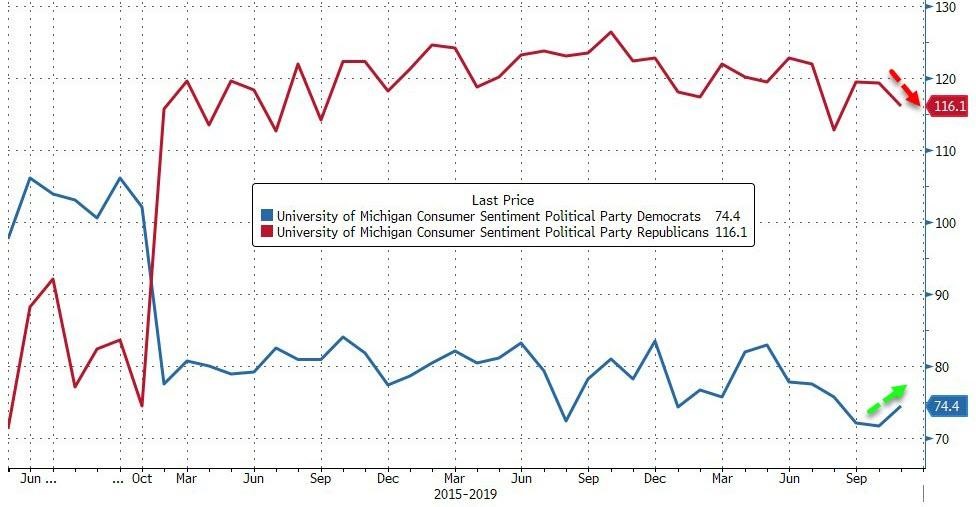 The Leading Indicator Index is flashing warning signs, similar to those in 2012 and 2016.  With business investment already in 2016 territory, it will be interesting to see if we repeat that slow down or if GDP actually contracts next year.

Inflation expectations spiked after the election, and then again after the tax cuts.  That put a ton of upward pressure on long term yields.

But when that inflation failed to materialize, the T10 plunged.

Ton of economic data this week, most notably Wednesday’s Q3 GDP and Core PCE (the Fed’s preferred measure of inflation).  While huge swings are unlikely, reduced liquidity could translate into outsized movements.