So You’re Telling Me There’s a Chance…

So You’re Telling Me There’s a Chance… 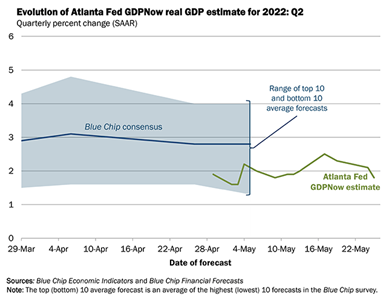 Friday’s Core PCE, the Fed’s preferred measure of inflation, probably let Powell exhale a bit. We now have two consecutive months of tiny improvements in inflation. So you’re telling me there’s a chance…

Will this cause the Fed to change course? Not yet.

But I think a continued trend like this opens up the possibility for a less hawkish Fed in the fall, just not today.

In fact, over the last 30 years, FOMC Sentiment has not been more hawkish than it is right now.

Household Savings (savings as % of disposable income) is back down to 6%, below pre-covid levels. All those free hand outs have been spent. Can prices keep going up if people don’t have the money to pay for stuff?

But there are also signs that spending habits aren’t yet changing. Once the money in the account runs dry, consumers appear to be turning to credit. “I never bought that mattress I wanted! Credit and forget it!”

Data is coming in worse than expected, faster than expected. Citi’s Surprise Index measures the over/under relative to forecasts. Eco data prints are surprisingly negative. I suspect the Fed is also surprised at how quickly the universe has changed.

The money supply has just now started to shrink, down a paltry $82B last month. Think about how much things have changed in the last two months and tell me how markets will behave with another year of this.

At some point, the rate of spending will decrease. Money is running low in savings accounts, banks will restrict credit, the labor market won’t be as hot as it is today (which will still impact psychology on those that retain their jobs). GDP is slowing. New home sales plunging.

Along those lines, market expectations for inflation are moving aggressively lower since March.

Maybe supply chain resolutions were already underway. The Fed hits the brakes on top of supply chain easing, and even though the rate hikes won’t impact the actual data until next year, optimism is deteriorating.

Isn’t it possible that the Fed has the next two meetings baked in at 50bps (total of 1.00% higher than today), gets SOFR to 2.0%, gets 3 more CPI prints between now and then, and if inflation is continuing lower…changes course? The odds of a 50bps hike in September dropped from 82% to 68% in the course of a few days last week, and I think it’s much lower than that.

Maybe the Fed changes back to 25bps hikes and does one or two at some combination of the September/November/December meeting.

Pauses altogether...and whispers of the next rate cut ramp up.

Maybe there’s a soft landing out there (doubtful). Or maybe inflation is cooling off enough that a downturn will be shallow. But before Powell can celebrate…

Supply Chain Pressures are ticking back up with China under zero-covid lockdowns...these damn supply chain issues are not directly influenced by Fed policy and could be the thorn in the side this year.

Friday’s jobs report will be the big number this week. Consensus forecasts expect a gain of 325k jobs, but the six month average is 550k, so it is clearly slowing.

Powell has said his #1 concern around inflation is wage inflation. Average Hourly Earnings, a measure of wage inflation, is expected to drop from 5.5% to 5.2%.