During our Thanksgiving gathering, I found it interesting that everyone assumed they were being safe, while everyone else is suspect.  We had our kids coming back from college and my sister, her husband, and their three young boys.  We all took tests.  Yes, I know they are not foolproof, but let’s just stack the odds in our favor as much as possible.

My sister was asking a ton of questions prior to the visit, very concerned we weren’t taking the same precautions.  Or that the college kids weren’t (when, in fact, they are probably the most cautious).  After a few days of visiting, it turned out she had gotten her test two weeks prior.  I couldn’t believe it – mine had been Wednesday night!  I pointed out all the people she had come into contact with since then, how her boys are in school five days a week while ours are just two, etc.

But she knew how cautious she had been, so in her mind they were the safe ones.  We were the unknown.  Plus, they always wear masks.

She and I have long disagreed about masks.  She believes they are the key to a quasi-normal life, while I believe they lead to risk-taking behavior, and therefore their benefit is overstated.  On Friday, the CDC urged “universal mask use” when indoors.1  They even suggested wearing a mask in your own home under certain circumstances.  Every time I turn on the tv, someone is telling me to wear a mask.  Score one for her.

I know this is going to be unpopular, but isn’t there at least some chance that masks aren’t keeping us as safe as we believe they are?  In July we wrote about the most comprehensive meta study on mask effectiveness.2  It suggested the transmission rate dropped from 17.4% to 3.1% if both people were wearing a mask.  That’s a huge improvement – 82%.  But isn’t there some chance that benefit is more than offset by the change in behavior associated with the mistaken belief that masks are 100% effective?

Just last week, NPR was quoting stats like, “As we’ve reported, when everyone in the household wore masks as a preventative measure before the infected person started showing symptoms, the risk of transmission was cut by 79%.”3  That’s a great improvement, and nearly identical to the 82% decline reported in the meta study (having multiple points of reference always makes me feel a little better).

For example, let’s assume a sample size of 100,000 infected people.  Interacting in close proximity indoors without masks would result in approximately 17,400 transmissions.

Now they all put on masks.  Once the sample size reaches 561,000, approximately 17,400 transmissions would occur.

I can’t find any reliable sources about how population movement has changed, but based on my highly scientific observations of the traffic during my commute, human activity is more than 5.6x higher than it was in April.

The surge in cases is terrible and is taking a huge human toll, but the message I usually hear is, “wear a mask.”4  But I think a lot of people already are.  The CDC reported that the proportion of U.S. adults wearing face masks increased from 78% in April to 89% in June.  That was in June – has mask usage really gone down since then?

Masks can dampen the spread, but their benefit can be more than offset by increased interactions.  If we wear a mask and then engage in behavior we would have otherwise avoided, are we really better off?  Every time I hear, “Just wear a mask,” I think…and keep your distance.  Avoid giant indoor crowds.  Etc.

But everyone has quarantine fatigue.  So they wear a mask, go out and do the things they want to do, invite their sister’s family for Thanksgiving, and then say to themselves, “Well, I know I’ve been safe…”

That was not good.

The economy added only 245k jobs last month, well below expectations of 460k.  In October, we added 638k jobs.

There are still 9.8mm fewer jobs than in February.  Assuming November’s pace, it will take four years to recover to pre-COVID levels.

The surge in cases and rollback of opening has dramatically hampered labor gains, and presumably that will only continue in the coming months.  The service sector lost 17,000 jobs last month, the first decline since April.

The unemployment rate fell from 6.9% to 6.7%, but that’s because the participation rate dropped. Long-term unemployment (greater than six months) grew by 385,000 to 3.9 million.  That’s 37% of the unemployed and rapidly approaching the all-time high of 45% following the financial crisis. 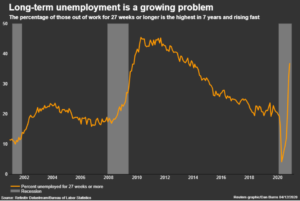 The BLS reported that 4.6mm unemployed Americans are relying on the federal emergency measures that are set to expire on 12/26.  If Congress doesn’t act, expect a sharp deterioration in the coming months.

Perhaps the only bright spot was the surprise uptick in average hourly earnings, considered a leading indicator for inflation.  It came in at 0.3% vs 0.1% expected.  With so many issues in the labor market, this isn’t the first sign of hyperinflation, but perhaps it’s a positive sign that we are avoiding stagflation for now.

So why did rates jump following the disappointing job report?

Because it increases the likelihood of additional stimulus.

Last month, McConnell said the gain of 638k jobs, “is a stunning indication of a dramatic comeback of the economy,”.  He continued, “Our economy is really moving to get back on its feet. That I think clearly ought to affect what size of any rescue package we additionally do.”

What will he say now?

With the special election in GA less than a month out, I suspect Dems will dare him to stonewall.

Two weeks ago we wrote about an interesting statement made by ICE, the administrator of LIBOR.  It notably excluded USD LIBOR from its updated timeline for a 2021 transition.   We took that to mean the transition would likely be given an extension.

In a coordinated statement from US regulators, the LIBOR transition deadline has been pushed back from year end 2021 to mid-2023.

This is primarily about legacy contracts.  The extension to mid-2023 is not random – nearly 60% of all LIBOR-based contracts will mature by then.  The statement emphasizes that no new LIBOR contracts should be made after the end of 2021.

The LIBOR transition is a significant event that poses complex challenges for banks and the financial system. The agencies encourage banks to cease entering into new contracts that use USD LIBOR as a reference rate as soon as practicable and in any event by December 31, 2021, in order to facilitate an orderly—and safe and sound— LIBOR transition.

While the SOFR derivative market has doubled this year, volume is still just 6.5% of LIBOR derivative contracts.

Another potential wrinkle is the introduction of Ameribor, an alternative being put forth by the American Financial Exchange.  This electronic marketplace is used by small and medium sized banks to trade directly with each other.  Last week, it completed its first swap on Ameribor.

The deal, “marks an important moment for Ameribor as it becomes a viable standard for swap markets,” the exchange said.

Imagine how hard it must be to be a regulator right now.  They’ve been working on a transition from LIBOR to SOFR since 2013.  They finally start to make some headway and we get hit with a pandemic.  Then alternatives start popping up to compete against their proposed fix.

The intent is appropriate, but the task is herculean, and the timeline was overly optimistic.  The regulators deserve credit for acknowledging the challenges.  We’ve said time and time again they would not yank the rug out from the market, and this delay confirms that.

The takeaway?  Continue to expect new deals to be increasingly quoted on SOFR.  This time next year, nearly every floating financing will reference SOFR.

But the existing caps and swaps that are on LIBOR will likely avoid a change until mid-2023…or maybe never if LIBOR isn’t actually discontinued.  There’s a chance the regulators just allow LIBOR to continue and fade to black over the next decade, similar to Prime.

Stimulus.  That’s all that matters.

An interesting thought exercise on the vaccine…if I have not contracted it, I wonder how my behavior will change the closer I get to receiving a vaccine?   Once there’s a light at the end of the tunnel, will I quarantine?    How far out before I do so?  Will I change my behavior three months out?  One month out?  What risks do I still tolerate and which do I mitigate?

Things that make you go hmmmm…