Strong GDP Won’t Cause Rates to Spike, but Treasury Supply Could

“…and presidential election poses one of the biggest risks to a change in those rules.”

It was fall 2012.  I was having lunch in Raleigh with one of my favorite clients.  He had asked what we were seeing.  I told him that, candidly, business had totally dried up.  Hit a wall.  Come to a total stop.  I thought maybe it was the Eurozone crisis, or some fallout from all those workout loans post-financial crisis.

“No, dumb dumb, it’s the election,” he posited.

OK, maybe he didn’t call me dumb dumb.  But that’s how I felt.  Pensford was founded in early 2009, after the 2008 election and in the midst of the financial crisis.  We had never worked through a presidential election before.

“Don’t let real estate people tell you they can’t do deals in this environment.  We did deals when interest rates were 20%.  During wars.  Currency crisis.  Democrats or Republican, it doesn’t matter.  We will always find a way to do deals.  It’s what we do.”

OK, so what gives?  Remember, we were a month out from an election and all activity had ceased.

“We just want to know what rules we need to play by, and a presidential election poses one of the biggest risks to a change in those rules.”  Lightbulb.  It seemed so clear with the benefit of just a few seconds of hindsight.

He concluded, “I think activity will pick back up once we’re on the other side of the election, regardless of who wins.”

He was right.  Early 2013 was insanely busy.  And we experienced another, albeit more mild, drop in activity in late 2016, followed by a sharp rebound.

In 2019, I sent myself about a dozen calendar reminders for 2020.  They all basically said, “prepare for a slowdown in the fall.  Act accordingly.”  Don’t make any major decisions, especially expensive ones.

COVID hit, rendering the need for those reminders moot.  My thought process in March went like this:

Even if we started to rebound from COVID after six months, that would put us right into the window of the election, effectively pushing back a rebound until 2021.  I prepared for the worst.  2020 was going to be a lost year, I was sure of it.

But it hasn’t.  It has been busy.  In fact, as I type this, we might be the busiest we’ve ever been.

Unlike in previous elections, real estate people aren’t holding back to see what rules they will be playing by.

They are transacting because they think the rules will be changing.

I always look to betting markets over forecasts and models because people’s behavior changes when there is money on the line.  It’s the best representation of what they truly believe.

I think the surge in activity means the real estate industry is preparing for a Biden win and potentially a blue wave.  They might say Trump is going to win because the polls are wrong just like they were in 2016, but they are behaving like Biden is going to win.

After all, there’s money on the line.

The consensus forecast for Thursday’s initial Q3 GDP is + 31%, far and away the biggest GDP increase of all time.  Of course, that’s like an Eagles fan bragging about a come from behind win against the Giants.

How well Trump can persuade Americans that he is responsible for a v-shaped rebound may determine whether he can narrow Biden’s lead.  I think he probably gets a knee-jerk bounce, but a small one.

Then again, he really just needs to persuade enough voters in a few key swing states.

Bloomberg Chief Rate Strategist Ira Jersey noted this week that the sharpest downturn in rates is usually based on shifting expectations for growth, e.g. a recession is coming.

The biggest move higher in yields, however, is not shifting expectations for improved growth.

The biggest moves higher come from a shift in expectations of supply. 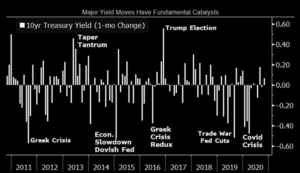 The increasing potential for a Democratic sweep1 is forcing the market to contemplate federal spending to the tune of $5T+ during Biden’s term.

That’s going to require a lot of Treasury supply.  And that’s why rates are climbing right now.

As it relates to the potential for higher rates, then, I wonder if Thursday’s GDP print takes a back seat to Thursday’s Core PCE reading?  Consensus forecast is for + 4.0% after last quarter’s -0.8%.

A 4.0%, while mostly meaningless as we bounce off the bottom, would be the highest reading since 1990.

While an economic rebound will apply upward pressure to rates, the threat of Treasury supply is what causes a spike.  The odds of huge spending will likely drive rates in the coming weeks.

After last week’s quiet calendar, this week is absolutely slammed with important data.