The 10T Spiked for Technical Reasons, Not Fundamental Ones

The House passed the $1.9T stimulus package on Saturday, sending it to the Senate.  The Senate has already ruled that the $15 minimum wage can not be included, so that will be stripped out.  The bill will then be sent back to the House for final vote.  The Democrats aim to have a final vote by March 14th, when enhanced unemployment expires.  Barring a surprise Dem defection, the bill will be passed, albeit maybe for more like $1.6T.   Before the fiscal conservatives get up in arms, let’s not forget that we paid for the $1.5T tax cuts in 2017 in the same way – Treasury issuance.

The largest impact of the stimulus will be Q2 and Q3 this year, then fading over the next year.  I know everyone wants me to cry “inflation!”, but I think inflation will follow a similar pattern.  Spike in Q2 and Q3, then fading. 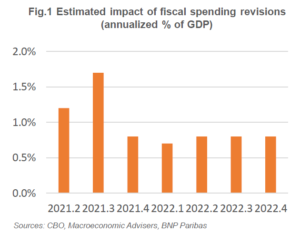 Americans have accumulated approximately $1.5T in excess savings since COVID, suggesting quite a bit of pent up demand as restrictions loosen.

Mostly unmentioned thus far is the Administration’s horrifically named Build Back Better plan.  How can you take the one thing we all pretty much agree on and screw it up?  Give it a name like that.  And it’s not even that original – the UN has its own Building Back Better program.

But that’s not why I bring it up.  Remember our discussion last month about reconciliation?  It’s that loophole provision that allows the party in power to get what it wants without that pesky 60 vote threshold.  Both parties do it, so put down the pitch forks.

It’s tied to the budget approval process.  Congress is expected to pass a budget once a year, so generally that means the controlling party can pass a little something extra once a year as part of that process.

Here’s the thing – Congress didn’t pass a budget last year.  That means the Democrats can use reconciliation twice this year.   The first is obviously the COVID relief package, and the second will be…

Biden’s plan is slated to cost somewhere in the neighborhood of $7T over ten years.  BNP’s research team expects the final plan to be much closer to $3T since even some Dems will blanche at the amount of federal spending in such a short amount of time.

In September, Moody’s estimated the net effect (after accounting for the economic benefits), the true increase to the federal deficit will be just $2.3T1.

I continue to believe the economy (and eventually Treasury yields) will detach from inflation, just like we saw over the last four years prior to COVID.

But still…$1.6T-ish for COVID relief, and $1T/yr for BBB, plus the $900B in December…no wonder the market is worried about inflation and bailing on 10T’s.

It’s been a while since we touched on this topic, but last week’s spike in yields is eerily reminiscent of a topic we’ve discussed previously – convexity hedging.  “I rode the convexity selling wave to a nifty 82% return in just one week” – obnoxious 13 year old Robinhood trader that could buy Pensford and convert it into a Pokémon card trading site.

When rates move dramatically in a short amount of time, it influences housing decisions.  Just last week I asked what would happen to the housing market if the 10T ran above 2.0%.  If you’re already mid-stream on house hunting, it might not change your mind.  But if you’re kicking around the idea of a refi, you’ll probably hold off.  Maybe some of you are encountering a similar mentality around commercial properties.

This is problematic for mortgage traders.  As rates climb, refinances slow down.  Assuming you were in a nice balanced position before the move, you have naturally gotten longer (duration) mortgages even though you didn’t do anything.

So you let it ride for a while, monitoring markets to see if you need to rebalance.  At some point, rates are up enough that you are in longer mortgages than you intended.  If you are too long, you need to sell to rebalance, right?  But you don’t necessarily want to sell your mortgage holdings, you just want to hedge the rate component of your portfolio shift.

Which security is most closely tied to the US housing market?

So you sell/short 10T’s.  What happens to rates when you short the 10T?  They go up, right?  And when rates go up, refi’s slow down even more.  Your duration naturally gets longer.  So you sell more…and the vicious cycle continues.

This leads to massive movements when mortgage traders start hedging at the same time.  We see a 25bps spike in 24 hours as they all rebalance their position simultaneously.

Last week’s movement was not a fundamental shift in market sentiment.  It was a technical reaction to the prior movement to that point.  Some algo triggers got tripped at 1.35% and continued getting tripped until 1.60%, at which point the opposite direction kicked in and the 10T plunged back to 1.40%.  I’m sure mortgage traders were having a blast.

At Thursday’s close, Treasury shorts were at their biggest position since the Taper Tantrum in 2013.  Some of them got squeezed out Friday, but it does suggest there is at least the potential for more to come.

You think last week was bad?  When I was still early in my career, the 10T went on a 1.50% run in two months in the largest convexity swing to date.

Today, nearly two thirds of all mortgages are held by the Fed and major banks, neither of which are huge convexity hedgers.  This means a 150bps selloff like we saw in 2003 is unlikely, but that doesn’t mean we are out of the woods.  BofA last week estimated that there are still nearly $600B in convexity hedging needs in the near term2.

What if inflation data comes in much higher than expected?  Or GDP does the same?  Or if Friday’s job report shows shocking strength?  Markets are on edge.

Should yields continue to spike, at some point the Fed would likely throw out some guidance intended to dampen the acceleration.  And if that fails, they might remind the market they still have Yield Curve Control (YCC) in their toolbox to keep a lid on yields.

Bottom line – I think the Fed likes a steeper yield curve and a 10T at 1.50% doesn’t bother them.  Generally, the Fed tries not to overreact to every kneejerk market swing.  But the closer we get to 2.00% or the longer we experience volatility like last week, the greater the likelihood Powell et al start reminding everyone they still have some tools in their toolkit.

As long as the data isn’t shockingly stronger than expected, I would expect the 10T to settle down in the near term as mortgage traders catch their breath.

This section has been dormant for about six months, because, you know, who cares.  But last week’s selloff is notable in that the market is now pricing in the first rate hike at the end of 2022, a full year ahead of the Fed’s current timeline.

Bottom line – if I can only pick one, I think the Fed is more likely to address this shift in market sentiment than the spike in long term yields.  I would expect a lot of rhetoric in the coming weeks that the Fed expects to keep Fed Funds low for an extended period of time.  Don’t forget that the FOMC has shifted gears towards averaging 2.0% inflation and we are going to have some catching up to do.

The Fed does not like a gap between its forward guidance and the market’s interpretation of it, so they will work to close that gap.  Don’t be surprised if the market reverses course here absent a massive improvement in data.

In the meantime, cap costs will be up, particularly for the third year when the greatest disagreement between expectations and Fed guidance exists.

Nearly a dozen Fed speeches scheduled this week, culminating with Powell on Thursday.

Friday brings the next job report.