The Fed Has Already Hiked More Than 2.0%

April 11, 2022
Beating Duke at K’s last game in Cameron, and then beating him again in the Final Four to end his career meant I was heading into the title game playing with house money. I wasn’t stressed. This team had surpassed my wildest hopes and they deserved all the credit in the world, regardless of the outcome.

Right up until halftime. And then, with a 15 point lead, I started wondering, “Could we be national champs?” Well, that would be awfully nice. I had hope. I hate when I have hope.

And then I heard the announcer say, “If Kansas can overcome this deficit, it will be the largest come from behind victory in finals history.” I immediately knew we were going to lose. My teams don’t just choke (or vomit…that took me back to McNabb in the 2005 Super Bowl), they choke in a way that ensures they are enshrined in the pantheon of worst losses.

Not only was my hope dashed, but I get to hear about the Heels being associated with the biggest come from behind finals victory ever. The record they broke was held for 60 years, so they might be overtaken right about the same time Coach Scheyer is retiring from Duke.

S&P downgraded Russia to “selective default” when it made a payment in rubles instead of the required USD. Markets are pricing in a 90% probability of full default before year end.

Credit Default Swap pricing has exploded, with big sellers like Citi and PIMCO staring at billions of dollars in losses should Russia be declared to be in default. That decision is likely to come this week. 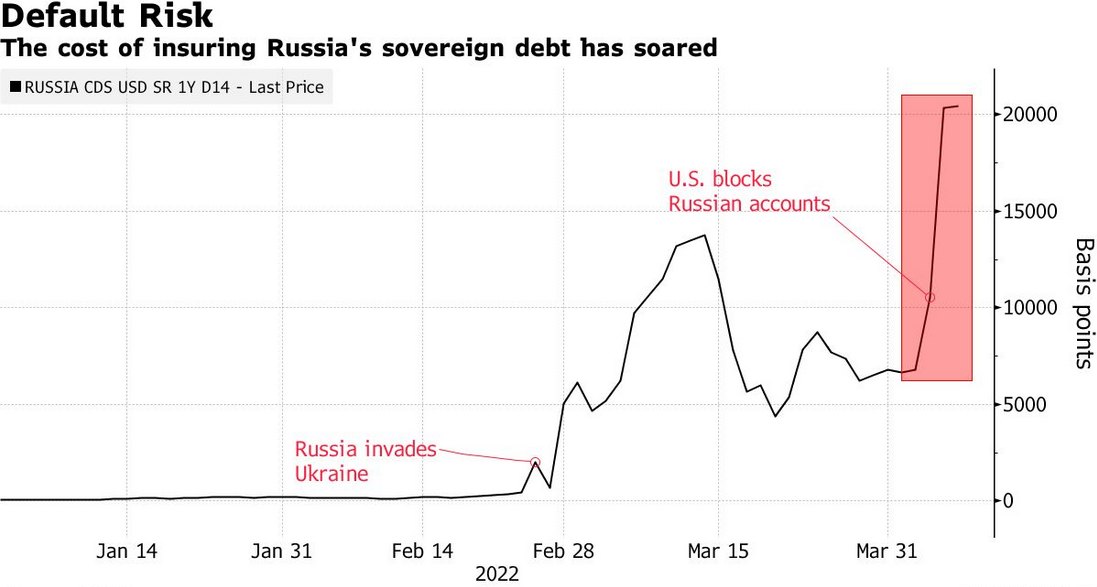 I said it last week, but I will repeat it here – it is very telling that the Fed is forecasting for Fed Funds above the perceived 2.50% neutral rate. The Fed didn’t accidentally suggest that. It fully intends to hike rates until we are in restrictive territory. Market odds of a recession in the next year are up to 30%, but I suspect that will be much higher a year from now.

Powell has done such a good job convincing the market of his sincerity that the market is pricing in a recession and the curve inverted two weeks ago. The Fed promptly released a research paper on why an inverted curve doesn’t matter (https://www.federalreserve.gov/econres/notes/feds-notes/dont-fear-the-yield-curve-reprise-20220325.htm). Nothing to see here, right?

My hypothesis has been that Powell et al. might be saber rattling to front load expectations, planning on eventually undershooting the number of hikes and saving the day. The intentional forecast of restrictive rates potentially casts doubt on that hypothesis.

If the Fed actually hikes as aggressively as it is suggesting, it will accelerate the slowdown. And what no one seems to be talking about is the impact of coupling hikes with balance sheet reduction (QT), which should partially substitute for rate hikes.

In other words, if the Fed were not undertaking QT, they would be calling for more than 3.0% in rate hikes. Or at least that’s how it’s supposed to happen. But I’m a little nervous the Fed isn’t adequately accounting for the tightening effect from QT.

Concern #1 - What’s the Appropriate Starting Point?
Remember this graph I loved so much I emailed the authors and asked them if they were going to update it? It’s the Wu-Xia Shadow Fed Funds rate, which attempts to measure the “real” Fed Funds rate when the actual FF bottoms out at 0%. It factors in things like QE and Fed-speak. “Real” Fed Funds was negative 2.0% until recently and has since climbed into positive territory.

And that’s before we factor in QT.

Don’t start skimming, this is where it gets good. Promise. I wouldn’t use all of those italics if I wasn’t serious.

Concern #2 - Impact of QT
SocGen interest rate quant Solomon Tadesse concluded that increasing the Fed balance sheet from $4T to $9T was the equivalent of taking Fed Funds to negative 5.0%. With tapering, forward guidance, and one actual hike, the Fed has already taken “real” interest rates from -5% to -2.5% in a few months, a tightening of 2.50%.

Tadesse’s research suggests that there is a ratio of tightening to easing that exists over time. He calls this the MTE, or Monetary Tightening to Easing, ratio. In general, tightening tends to be 70% of the easing.

Remember that he believes the “real” Fed Funds bottomed out at -5.0%. Since Fed Funds was at 2.5% prior to that massive easing cycle, that’s a total drop of 7.5% in the last easing cycle.

With an MTE of 70%, that means the total tightening this cycle this time around should be about 5.25%.

Think back to the Wu-Xia graph. The “real” Fed Funds has tightened 2.25% already, which mean we have 3.0% to go. The Fed hikes 3.0%, and boom! Soft landing nailed! Drinks all around! Powell wins!

“Normalizing the Fed’s oversized balance sheet through QT would curtail the space for rate increases significantly. Based on a preliminary assessment of QT’s impact on the sharp tightening witnessed in late 2018, a QT program at the scale of at least the 2018 level, a highly likely move, would allow only about half or less of the projected tightening from explicit policy rate hikes.”

Tadesse’s colleague, Albert Edwards, takes it a step further and concludes, “the actual FFR will struggle to get to 1% before the Fed needs to halt the tightening cycle. That is shocking.”

I don’t think the Fed is stopping at 1.0%, or 1.50%, particularly given the political pressure around inflation. But I do believe each hike above 1.50% will be incrementally more challenging to enact, the impact of QT is not being adequately factored in, the odds of over-hiking are significant, and we may be talking about a recession sooner than we expect.

With all that in mind, the following may surprise you.

I would not be shocked if the 10T continues to experience some upward pressure in the near term. I think the inversion, while predictive 18 months into the future, is not necessarily telling of how strongly the economy will still do this year given the massive liquidity that still needs to be drained out of the system.

Powell himself believes rate hikes won’t really impact inflation until next year, so there is a lag between liftoff and economic leveling off. If the data keeps coming in strong, the market could say, “Maybe we were overly pessimistic and got spooked by the Fed’s pivot because everything seems ok…”

Markets are forward looking, but it will be hard to completely look past how strongly the data continues to come in for the foreseeable future.

The 10T might climb until the true effect of rate hikes and QT are really felt (or foreseeable by markets) in the economy. Then we can all jump back into the recession boat and send 10yr yields lower.

Inflation data will be the primary headlines this week, but we also get consumer and small business sentiment.