The Fed is on the Clock…to Cut Rates

I refused to entitle this “March Madness”. Too much of a layup…(see what I did there?)

As expected, the Fed hiked 25bps today, the first hike since December 2018. No shock there.

The shock, however, was how aggressively the Fed raised its forecast for rate hikes over the next two years. Here are the updated median forecasts for Fed Funds:
Year End 2022 1.9%
Year End 2023 2.8%

There was one dissent by St Louis Fed President James Bullard, who voted for a 50bps hike. Eight members expect more than 7 hikes this year.

Everything about this shift smacks of desperation. Powell isn’t quite Full Volcker, but he is definitely throwing looks in that direction. Four months ago, no hikes. Today, 2.00%. Insanity. So much for credibility.

When the Fed hikes aggressively to control inflation, you can forget about a soft landing. If the Fed ultimately ends up hiking along this trajectory, this only ends in one way – a recession.

Powell disagrees with me, saying, “This is a strong economy and one that will flourish in the face of less accommodative policy.”

Following the meeting, the market is pricing in rate cuts in 2024.

Blue Dots (aka Summary of Economic Projections aka SEP)
Holy cow, what a shift. The Fed forecasts inflation this year of 4.3% this year vs December’s forecast of 2.6%.

If the Fed believes the longer-run neutral rate of 2.0%, these forecasts suggest that rates will be in restrictive territory by year end. 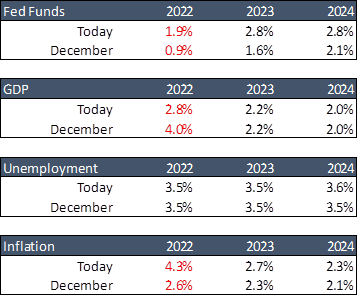 Question from the state school crowd: how can we hike rates, drop GDP forecast as a result, but expect the unemployment rate to hold steady at 3.5%?

Inflation
Powell said that prior to Russian invasion, most Fed members expected inflation to peak at end of Q1 then fade throughout the year. Now, the invasion is causing upward pressure on prices while supply chains remain tangled. The Fed still expects inflation to trend lower in second half of year, but slower pace than previously expected.

When asked how much of the drop in inflation is attributable to hiking rates, he said that labor force participation, supply chain, base effects will be the primary drivers of lower inflation in 2022.
Powell believes the effect of hikes won’t actually show up until 2023 because of the lag effect monetary policy has on the economy.

Quantitative Tightening aka Balance Sheet Reduction
“The Committee expects to begin reducing its holdings of Treasury securities and agency debt and agency mortgage-backed securities at an upcoming meeting.” That sounds an awful lot like the next meeting in May. I think this is the most under-discussed aspect of this tightening cycle.

Powell said the framework of this reduction will be similar to last time, but faster. Well, last time around the Fed was only able to reduce the balance sheet for a little more than a year before markets seized up and they had to pause.

This bleed off amplifies the effects of the hikes. If the Fed is hiking aggressively and reducing the balance sheet, how quickly will the economy tighten? Will they topple us into a recession?

We are in unchartered waters.

This puts the steepness (or flatness as it were) at just 25bps. We are flirting with an inversion, which will signal a recession.