The First Insurance Rate Cut Since 1995

In other words, there is a 100% probability the Fed is cutting rates this week.

Until the strong job report earlier this month, I thought there was a chance the Fed would cut 50bps and just be done with it.  But couple that report with last week’s 2.1% GDP print, and I think the Fed would have a tough time defending a 50bps cut at this time.

Don’t forget this is an “off” meeting, meaning there won’t be any updated rate or economic projections.  Instead, the statement will be released announcing the rate cut and then Powell will jump into his Q&A press conference.

If anything, I think the market could be overdone right now and there’s a chance the Fed disappoints this week.  LIBOR futures put 1mL at 1.49% in June 2021, which I think is entirely possible…but not based on current data.  The market is expecting continued deterioration over a longer time frame, while the Fed deals more with the here and now.

That isn’t to say the Fed doesn’t look ahead, just that it tries not to overreact.  We’ve repeatedly drawn parallels with the 1994-1995 rate cycle.  A total of 3.00% in hikes, followed by a five month pause, and then a subsequent 0.75% in cuts over the next seven months.  The July 1995 FOMC transcript revealed Greenspan’s mindset and perhaps gives us some clues about Powell’s.

Greenspan lowered rates as an insurance policy, explicitly moving before the actual downside risks materialized.  The notes from the meeting also revealed that they believed a 25bps cut sufficed initially because, in part, the market never expects the Fed to just cut 25bps.  By cutting 25bps, it sent a message that more cuts would follow even if they didn’t say it aloud.

That was then, this is now.  Will the market interpret one cut as just the beginning?  Yes.  But just in case…at the most recent FOMC meeting, seven members projected at least 50bps in cuts this year.  This will not be the last rate cut this year.

The deciding factor for the insurance cut in 1995 was that Greenspan & Co. felt the upside risks to inflation were minimal – low cost in exchange for potential gain.

At his Congressional testimony a few weeks ago, Powell said, “there is a risk that weak inflation will be even more persistent than we currently anticipate.” 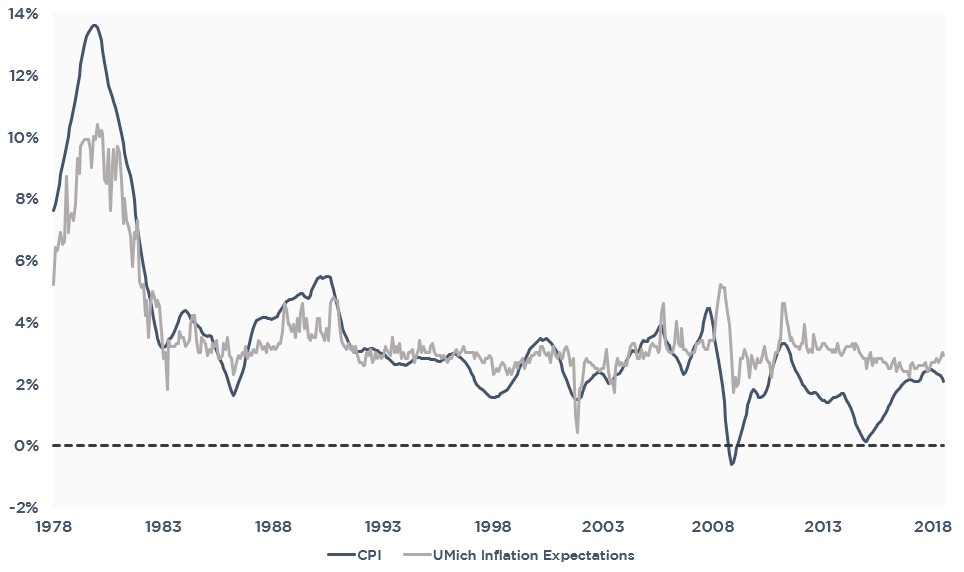 Same graph, but now simply measuring the delta between the two.  As you can see, expectations have consistently exceeded actual inflation since the financial crisis.

Inflation/disinflation/deflation/lackofinflation will be guiding themes in the coming years and will likely conspire to keep rates low.

And of course, the Fed meeting.