I got vaccinated Wednesday.

I spent Thursday and Friday with some body aches and fatigue, basically just feeling crummy.  Otherwise, it was a non-event.

While North Carolina and South Carolina have separate guidelines, residents can seek a vaccine in either state.  My wife qualified for NC guidelines a few weeks ago and received the first Pfizer shot, but I wasn’t up until the end of April.  We were hearing a lot of chatter about how the J&J shots were on the way and the Carolinas would have a surge in vaccinations in the coming weeks.  The J&J efficacy in US trials was 72%, compared to the 94%-ish for Pfizer and Moderna.  This led to my question of vaccine-shopping last week.

I posed the following question to my employees:  You could get the J&J vaccine today, or wait until June for the Pfizer/Moderna first shot – which would you do?

I didn’t know I would be presented with that scenario just a few days later.

Charlotte is very close to the South Carolina border – our house is just 8 miles from the border.  If they say UNC and Duke are separated by 8 miles and two shades of blue, you might say Charlotte and SC are separated by 8 miles and two shades of belief in science.  SC has an excess of vaccines – so much so local news have been running stories about how pharmacies are sitting on a stockpile with very few booked appointments each day.  They were encouraging people to go to SC for vaccines.

It was a bit surreal.  I walked into an empty pharmacy.  I stopped, figuring I was in the wrong place.  I was expecting a line of people or at least a small crowd.  I was literally the only person there.  “You have the look of someone that isn’t sure if they’re in the right place” – nice lady behind the counter.  She hit the nail on the head.  I said I was there for a COVID vaccine and she told me I was in the right place.

They took my insurance card, shuffled some papers, and passed me off to the pharmacist.  She took me into a room, asked if I had any questions, and gave me the shot.  From the moment I walked through the door until the moment the needle hit my arm was less than 3 minutes.  No ceremony. No trumpets.  No confetti.  Just like that, I was vaccinated.   The CDC says I can follow the same guidelines as the radical elitist Pfizer recipients, so I plan to.

The pharmacist told me I would be good to go in about two weeks.  She asked me to wait 10-15 minutes before leaving just to make sure I didn’t have any adverse reactions.  I was handed a vaccination card and encouraged to take a picture of it and save it in my phone.  I suspect this evidence will be required to do certain things in the future.

In the twenty minutes I was there, not a single other person came in for a vaccine.  I saw one elderly person come in, clearly a regular, because they yelled, “Norm!”  But he just picked up a prescription and left.  The four chairs lined up outside the pharmacist’s vaccination room sat empty during my visit.

I’m still a bit conflicted.  I’m not at risk and would prefer that the elderly be using those shots, but if the slots are open, does it really do any good to not get vaccinated?

This led to a few interesting thoughts.

The first is that vaccine supply will exceed demand pretty soon, particularly in certain regions and as J&J becomes more widespread.

The second is that Fauci & Co have to say “just take the first vaccine available” because that’s what’s best for society as a whole this year.  But I suspect that tune will change in a year when they can afford to be pickier.  J&J will implement a booster shot plan, or P/M will be encouraged over the others for first time recipients, etc.  Something.  I appreciate all the disclaimers that the trials were done at different times with different variants running around, but I suspect the J&J will ultimately prove to be less effective.  Given how easy it is to store, perhaps it becomes the go-to for the annual COVID shots (yes, that’s coming).

The third is that we may hit that tipping point sooner than Biden’s July 4th goal.

On Friday, the CDC said 35mm Americans are now fully vaccinated, with nearly 70mm having received at least one shot.  We’re about a month in and Friday alone saw 2.9mm shots administered.

I put together an overly simplistic table to see if I could determine that tipping point of when we might really round the corner.  There are more flaws than I care to dig into, but I think it’s directionally correct.  Couple of assumptions to note:

While on the subject, did you know that fewer than 2,000 Americans under the age of 30 have died from COVID?  I think that’s part of the reason the younger crowd keeps going out.  We get furious with them for attending huge parties, but they feel invincible because they kind of are.  The mortality rate among that demographic is 0.0012%.   Half the population in the US is nearly immune.  Let that sink in for a moment.

How many activities do you participate in with that type of mortality rate?  And before you yell at me, “but it’s contagious!  It’s about protecting others!”, keep in mind that my risk of dying in a car accident this year is 1.75x greater than someone under the age of 30 dying from COVID, but I keep driving and putting others at risk.2  They behave differently than 60 year-olds because their risk is different.  It would be weird if they didn’t behave differently.

While we’re on the topic, 96% of COVID deaths are among those 50 years and older.  That’s why we don’t see headlines of young, healthy people succumbing to COVID.  I also think that could be contributing to the lack of fear right now.  We aren’t just experiencing COVID-fatigue, we’re self-assessing and determining we aren’t at that great of a risk.  The NCAA tournament canceled last year because we just didn’t know.  But there haven’t been lot of stories about athletes getting sick and not a single death that I have heard of.

The vaccine rollout should start with the elderly.  But isn’t that also a tacit admission that a blanket shutdown was non-sensical.

In 11 NC school districts, there were 32 cases out of 100,000 students, and 0 resulted in a child infecting an adult.3  Why are schools still virtual?  Vaccinate the teachers, particularly those over 50, and send them back to school.  Yes, that is self-serving.  But it also helps open the economy and minimize the damage being done to professional women that are bearing the brunt of homeschooling duties.

But I digress…back to my tipping point table.

I tried to account for those that have gotten COVID and still have antibodies, and assumed those antibodies faded after six months, and then factored in the current pace of vaccines.

Big Assumption #3 – One Shot vs Two

Because the Pfizer/Moderna shots have proven very effective after just one dose (and why England changed strategy), a lot of the people that have received the first shot are already benefitting significantly and protecting others from the spread.  I couldn’t find stats on the percentage of J&J vs Pfizer/Moderna, so I assumed the majority of shots will be Pfizer/Moderna and that the efficacy is weighted to the second shot.

Only 69% of adults surveyed have indicated they will get a vaccine.  That’s 177mm Americans.  That means by June, we will likely reach a point where everyone that plans on getting a vaccine has gotten a vaccine.  The end game is nigh.

For those that believe we need 90%+ immunity in order to achieve herd immunity, you should expect to hear a lot of reasons in the coming months why it’s ok to lower that number to 70%.  Follow the science and all…

I also think that table is overly-conservative.  People with just one shot will likely contribute to a dramatic decline in cases.  Furthermore, the most at-risk are already largely vaccinated, so the headlines should improve quickly.  It’s been a year since “flatten the curve” was all the rage, but I think we are about the see the curve flatten dramatically.

If June is the end game, that means the end of April or beginning of May is probably the tipping point.

There are 46 days until the end of April.  Assuming 2.9mm shots per day, that’s 133mm shots.  Even if we need to cut that in half for two doses, that’s 67mm fully vaccinated.  That’s 26% of the adult population.

Add that on top of the 14% that have already received two shots, and that’s 40% fully immunized.  Throw in some percent that currently have the antibodies and we are knocking on the door of 50%.

I don’t know where herd immunity is achieved, but I think 40%-50% puts an enormous dent in the spread.

Biden said July 4th will have small gatherings.  I disagree.

I think July 4th will have a lot of people asking, “why should it only be small groups at this point?”

We’ve been beating a dead horse over the last few months, reminding everyone that Treasury supply, not growth expectations, causes spikes in yields.

Last week, JPM rates strategist Jay Barry noted that, “supply has become somewhat harder to absorb, especially over the last month, and yields have become dislocated from fundamental drivers.”  He also pointed out that the typical Treasury auction is 50%-95% larger than a year ago.

His boss, Jamie Dimon, said, “I would not buy 10-year Treasurys.”  He continued, “I would suspect there’s a pretty good chance you’re going to see rates going up.  And people are starting to worry about that.”

One of my favorite research teams, BNP Paribas, is now calling for a 2.0% 10 Year Treasury.

There’s a good chance that after Wednesday’s FOMC meeting, the headlines will scream, “FOMC Projects Hike in 2023.”

Me and my bff Jay Money Powell agree, “There’s a difference between a one-time surge in prices and ongoing inflation.”  I think those comments, and the sentiment behind them, will be the key message.

Goldman believes the Fed has to acknowledge these risks now so they can explain why they are ignoring them in the future, “Signaling awareness of these transient boosts to inflation in advance might make it easier for Fed officials to credibly downplay them later.”

This will be a tricky meeting for the FOMC.  They need to acknowledge the improving outlook and rising inflationary pressures, while defending their current policy stance.

The statement and the Q&A will be benign.  But the market will really be watching the Summary of Economic Projections (SEP), aka dot plot, because it’s the anonymized forecasts of the individual FOMC members.  There’s a growing consensus that the projections will now call for a rate hike in 2023.  How will an additional $1.9T stimulus impact those forecasts that were last based on just December’s $900B stimulus?

In an interview on March 4th, Powell said “a couple of quarters, or even more than that, of prices being above 2.0% would be insufficient to change the psychology of inflation expectations.”  That’s the official stance.

But will the members anonymously start forecasting a hike in 2023?  At the last meeting, five members projected one hike in 2023.  All it would take is another five members this week to push the median forecast and the headline on Thursday will read, “FOMC projects hike in 2023!”

I wouldn’t read too much into that.  There’s a big difference between an anonymous forecast and a coordinated message.  Plus, one hike a tightening cycle does not make.

The only thing that matters this week – the NCAA tournament! 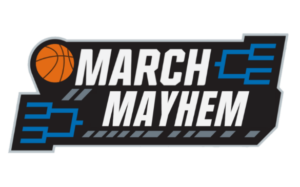 Click the logo above to enter our fun 8 team upset pool.  This isn’t another boring bracket, just pick 8 teams and you are done.