Am I the only one that feels like the Trump presidency needs to be measured in dog years?  The first 100 days has felt like at least 700 days.  I have never been this engrossed in politics…which is probably what Trump wants, right?  He won’t fire Spicer because he gets good ratings.  Even if we tune in for the train wreck, we still tune in.  Incompetence isn’t the greatest sin, irrelevance is.  Perhaps the rhetoric on North Korea is really just to drive ratings, which is a great way to run a nation.  Only 9,527 until he is re-elected, assuming he doesn’t voluntarily become a one term president because this job is just so darn hard and he wants to return to his easy life.

In a related story, Pensford turned 56 years old (in dog years) this weekend.  Like Trump, I thought it would be easier, but I wouldn’t change a thing.  Thank you to all that helped make that happen.

We have been warning about weakness in GDP for the last two months, led by the repeated downgrades by the Atlanta Fed GDPNow forecast.  GDP came in last week weaker than expected at 0.7% vs the forecasted 1.00%.  Rates actually climbed, probably in part due to the number coming in a little bit better than the dire GDPNow forecast of 0.5%.

The Fed meeting this week is an “off” meeting, meaning no Q&A by Yellen and no update to their own forecasts.  We don’t think the Fed will throw in the towel on rate hikes on the back of one weak GDP number for a couple of reasons.  Firstly, Q1 GDP is notoriously volatile and is frequently the weakest quarter, generally driven by seasonality and bad weather.  Secondly, the Fed has little reason to lower expectations of rate hikes, but if they lower expectations and then need to talk them back up at some point.  It’s much easier to hold off and keep the market happy than to build support for more hikes.

The FOMC is likely to keep beating the drum on progress towards 2.0% inflation, moderate growth and a firming labor market with an UR of 4.5%.   Confidence is still relatively high, but is starting to show cracks as Trump fails to make progress on his pro-business policies.  Don’t be surprises to use of words like gradual, patient, and transitory.  We will be very surprised if they don’t brush past the recent weakness by illustrating improvements to date “over recent quarters.”

What language could catch the market off guard to the hawkish side?

Remember, the Fed wants to hike just to get away from 0%.  It doesn’t need gangbuster growth to hike, just growth strong enough that the market won’t puke if it hikes.  They will not lower expectations for a June hike based on one disappointing GDP print.

The range-bound theme continues as the market paused last week ahead of this week’s FOMC meeting.  We doubt the FOMC will say anything to break the recent band, but traders have to remain balanced heading into the meeting just in case. 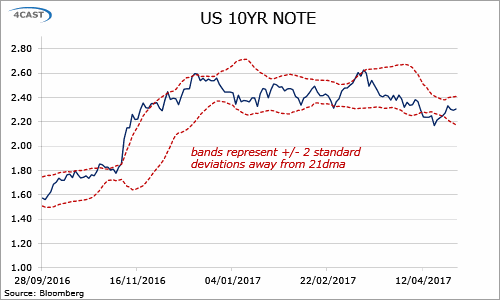 More likely, it will take progress on Trump’s policies (or lack thereof) to drive a significant rate movement.

As noted last week, we do not think the market has given up on higher yields yet.  After carrying massive shorts since the election, traders bleeding carry costs finally covered their shorts, driving yields down.  Now that the slate has wiped clean, there’s nothing to prevent traders from piling on huge shorts again except the painful memory of their recent losses.

We think progress on taxes or stimulus will force traders to start testing the water again.  The previous floor of 2.31% has become the new middle, with a floor of about 2.25% and a ceiling of about 2.40%.  Again, we doubt the Fed meeting this week will lead to that range breaking and instead need to focus on Trump’s policies for guidance.

In addition to the FOMC meeting, we also have the next job report due out on Friday. Last month showed a gain of just 98k jobs, so the market will be looking to see if we rebound to the previous average gain of around 200k.  Also, average hourly earnings will be closely watched as a leading indicator for inflation.