Unemployment Doesn’t Go Up Until The Fed Has Started Cutting

On June 11, 1997, Michael Jordan’s Bulls were in the NBA Finals against the Utah Jazz. This was the middle title run of the second three-peat. The first had involved the Seattle Supersonics not using Gary Payton to guard MJ, while the third involved his famous title clinching shot that he should have ended his career on (and no, he didn’t push Byron Russell).

The middle series in 1997 was ultimately remembered for Jordan passing to a wide-open Steve Kerr, who drained a 3 to win it all in Game 6. But I remember it mostly for the game prior, what most people refer to as the Flu Game (later determined to be food poisoning). Fever, vomiting, weakness…and taking on a Jazz team that had not lost at home in the playoffs. Jordan got out of bed at 5:50pm for a 7pm tip-off.

He was sluggish, sleepwalking through the first quarter. The Jazz built a 16-point lead early in the second quarter. Jordan then responded with 17 points, helping to cut the Jazz lead to just 4 points at halftime.

He barely came out of the second half and sat much of Q3, watching the Jazz extend their lead. With his team trailing, MJ came back in the fourth quarter, scoring 15 points, including the game deciding 3 pointer with 25 seconds. The Bulls won and Jordan collapsed into Scottie Pippen’s arms as they walked off the court (the image you probably know best). Jordan doing Jordan things.

I am reminded of the Flu Game this week as I sit here on Day 6 of the flu. Fever, vomiting, weakness…but fighting through it all to write this newsletter. My Flu Newsletter. JP doing JP things. With CPI last week, I could argue the stakes are even higher than they were for MJ…

But the Flu Game is memorable to me for another reason. It was the last sporting event I saw before shipping out for Basic Training on June 13, 1997. It would be weeks before I would learn the Bulls had clinched while a bus was dropping me off at the Ft Benning barracks. I would go on to become one of the least decorated soldiers in military history, getting far more out of the Army than it got out of me. I am forever grateful to the Army for allowing me to be a part of the greatest team in the world, even better than the 1997 Bulls.

Happy Veteran’s Day to all those who have served and the families that have supported them.

Cap prices plunged (if you could get a bank to get back to you), down 20%+ almost immediately.

It was a collective market exhale. I also think it was overdone.

I still think inflation will roll over next year (more on that in a bit), but in the near term it’s hard not to think about the last two 0.3% pump fakes that were immediately followed by surprise rebounds. 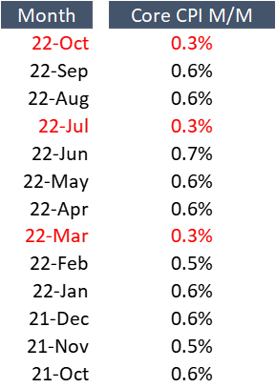 This is why Powell will want a string of these before changing the message, which makes me think the market might be disappointed if the Fed isn’t dovish enough in coming weeks. A retracement may be in the works this week.

Inflation is Mostly Limited to a Couple of Things

Examining just the Goods component of CPI, inflation has plunged since the Fed started hiking in March. Should the price of Goods continue falling at the same pace, it would be below 2% by the end of Q1.

In fact, most the inflationary pressures can be found in two places – Services and Shelter.

While CPI Goods have plunged, CPI Services is up 6.7% and still climbing.

Shelter is even more dramatic. The Shelter component of CPI typically accounts for about a third of the overall print. However, since we already know price increases of Goods are falling, that means Shelter comprises a greater percentage of the overall increase.

But don’t take my word for it. From the BLS CPI release on Thursday, “The index for shelter contributed over half of the monthly all items increase.”

Shelter is also stale, basically reflecting terms from 6-12 months ago. Most landlords are reporting 0%-2% increases.

Because Shelter is so slow to adjust, I worry the Fed will keep hiking based on stale data. By the time Shelter has caught up, it will be too late.

What will cause Shelter to cool off?

The job market. The psychology of an unsustainably strong labor market must change before renters will demand flat/lower rents. I see a few paths.

I think the Fed will be confronted with a dilemma. Which is more important – driving down inflation or preventing unemployment from surging? You can’t have it both ways.

A wide range of data in the coming week from housing to industrial and manufacturing indexes. The week starts Monday with inflation expectations followed by PPI Tuesday and retail sales filling in the mid-week slot. It won’t be as fun as the last few weeks, but it should present a picture of how the hikes are beginning to take effect across certain industries.