Markets were closed yesterday for the holiday.  We’re back at it today with a Cliff Notes version of the 10 Year Treasury movements.

A year ago we put out a paper highlighting how the 10 Year Treasury moved after the conclusion of the last five tightening cycles.

In general, the 10T fell over the first year.  Once the Fed started cutting, however, it rebounded in year two.  Eventually, rates continued lower.

The tightening cycle that feels the most similar to the most recent one is 1995.  The Fed overhiked, backtracked, and the expansion continued…before eventually toppling over a few years later.

Here’s an update to the earlier graph.

Dashed black line – what our study last year suggested the 10T would do over the last year.  This was based on the average of the 10T movements following the last five tightening cycles.  While incredibly simplistic, it was directionally very accurate and only off by about 25bps. 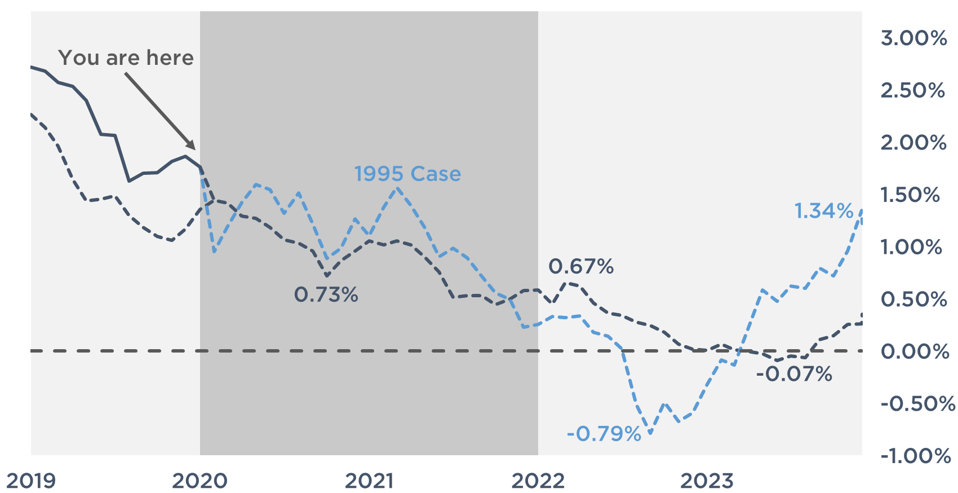 Whether we take the average of the last five tightening cycles or we take the 1995 scenario (which was really a best case scenario), the 10T yield would continue to fall.

Sure, the whole coronavirus fear is artificially depressing rates.  But as soon as we contain that, the 10T will spike.

Probably.  But it would likely be a temporary and limited move.

If a headline broke today that the coronavirus was fully contained, the 10T would almost certainly move higher.  It would take the most pressing fear off the table.  Risk on!

But then we are just back to the normal drivers of long-term fixed rates like GDP, inflation, global yields, etc.

When the Fed has the printing presses turned on, stock prices disconnect from EPS.  As a former colleague liked to say about Fed accommodation, “stocks can only go up!”  If you can fog a mirror, you can make money in the stock market when the Fed is printing money.  It’s not just stocks, all asset classes go up.

Bonds do, too.  That’s why it’s so tough to envision a scenario where the 10T makes a sustainable move higher until inflation and GDP pick back up.  There’s so much money floating around that some of it is bound to end up in Treasurys.

Please give me 60 seconds for a brief commercial for Pensford.  With fixed rates at or below floating rates, swaps are looking more and more attractive so banks will become increasingly more competitive.

For clients and brokers that know us mostly through caps or defeasances, the comment we most frequently hear is, “The lender wants them to do the swap with them, so I don’t think there’s a need for Pensford on this one.”  The assumption is that we run an auction for swaps because that’s what we do on caps.  We do not.

As a reminder, nearly every swap we work on is a direct negotiation with the lender. We do not auction these off like we do caps or defeasances.

The lender has an inherent advantage on all swap transactions because they can use the underlying real estate collateral to also secure the swap exposure.  If you called us up and asked us to find another bank to bid on the swap, we would ask, “are you willing to post cash to a third party bank?”  You will say no, and that leads us right back to the lender.

It’s market knowledge that creates leverage, not an auction.

Plus, our attorney negotiates those ISDA documents you have to sign.  Despite what we normally hear from swap desks, ISDA’s are highly negotiable and should be reviewed by an experienced ISDA attorney prior to execution.

We don’t direct the swap business away from the lender, we simply add transparency.  The lender deserves every opportunity at the business – they are stroking a big check.  But as one client once told me, “I am fine with the swap desk making some money, I just don’t want them running around the trading floor giving high fives to each other after I lock.”

If you are considering a swap, please give us a call to see if we can add value to the process.  If we can’t, I will tell you.

We now return to our regularly scheduled programming.

Financial Conditions continue to be extremely accommodative, setting the stage for another strong first half of the year.  It is exceptionally challenging to encounter a slowdown when conditions conspire to be this easy.

As a reminder, 100 is the demarcation line between restrictive (above 100) or accommodative (below 100).  We tend to enter recessions as financial conditions breach 101.

As you can see in the graph below, we are near all-time lows, meaning it is just about as easy as ever for the economy to chug along.  These can reverse course pretty quickly, but the pipeline will already be full by then and likely carry through.

Despite all the scary headlines, this graph gives me reassurance that the first half of this year will be busy.

The coronavirus’ hold on yields likely to continue.