One of the Fed’s biggest challenges is using demand side policies to affect supply chain dislocations. I’ve quipped that hiking rates won’t suddenly open up the ports in LA, but if you’re a Fed official, you’re probably thinking, “When all you have is a hammer…”.

The Fed’s actions will impact demand. Over time, Supply Side will pass the baton to the Demand Side of the equation.

As the supply chain dislocations resolve themselves, the Fed will be confronted with a slowing economy. An elusive soft landing will reside somewhere in that passing of the baton.

Speaking of those pesky LA ports, Eugene Seroka, Executive Director of the Los Angeles port, said 39 ships were waiting to anchor outside Los Angeles and Long Beach, compared with more than 100 earlier in the year.

In a related story, the Fed’s Global Supply Chain Index peaked in January, two months before the first hike.

Buying conditions have been on a downward trend for some time. This is bad juju for consumer spending and GDP. 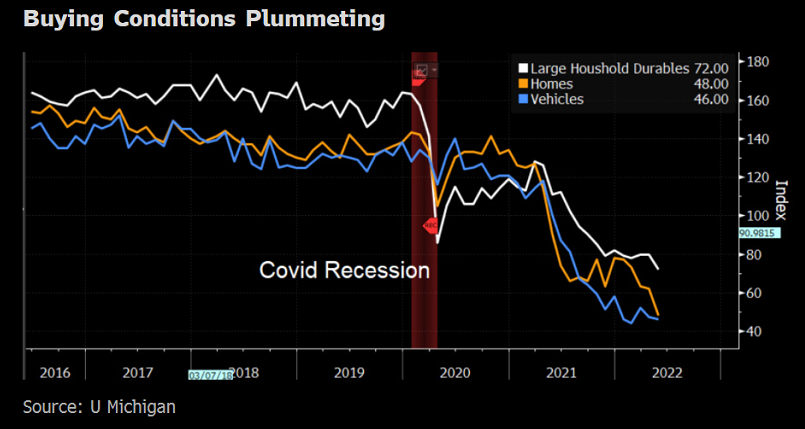 Sure, higher rates might cause stocks to plunge quickly, but it can’t impact the overall economy that quickly. Housing might experience a quick cooling off, but what about things like clothing that aren’t directly impacted by low interest rates?

Omair Sharif of Inflation Insights predicts inflation will fall to 5.3% by December. He also computed scenarios high and low scenarios of 7.1%, and 4%, respectively. But that’s an annualized number – his baseline report for the month of December is “just” 2.5%.

Remember, Powell himself believes the current Fed actions won’t impact inflation readings until Q1 of 2023, so these forecasts are likely to materialize regardless of Fed policy decisions today.

Look how quickly Financial Conditions have tightened in six months. We are barreling towards restrictive territory and have only just begun hikes and QT.

How long before we are in restrictive territory? Glad you asked.

If conditions continue to tighten at the same pace, we will

Furthermore, take a look at how the Fed has handled restrictive territory since the financial crisis.

What’s the game plan here if we cross the threshold before the June 15th meeting?
Powell and others have pretty much confirmed that the Fed will hike 50bps at each of the next two meetings. That would put Fed Funds at 2.0% by the end of July.

The Fed has set us on a path towards a demand side recession while speculating on the timeline of supply chain pressures easing. What an impossible task. Throw in a Russian invasion of Ukraine and a likely European recession and the odds of a misstep appear to be climbing.

And if political pressure was applied to Powell at year end to hike quickly because inflation was eroding approval ratings purchasing power of everyday Americans, what could that political pressure look like in 6 months with rising unemployment?

I believe the Fed will either change its tune or will hike us into a recession quickly. Both scenarios result in a lower-than-expected Fed Funds, either from a leveling off or a retracement. Each hike above 2.0% will be incrementally harder to pull off and to sustain.

Light week regarding economic data. Retail Sales on Tuesday could provide a glimpse into spending habits, which leads to GDP.