Why 10 Year Rates Fell After the Job Report

You talk sh*t to Florida one time and it sends you home with COVID.  And yes, I have been vaccinated.  Mom was right – I am special!

While you were reading last week’s newsletter, I was making my way to the back of the strugglebus.  I got through Monday as if it was a typical illness.  Sore throat and runny nose were the primary culprits.  Since I didn’t associate runny nose with COVID, I never considered it as a possibility.  Plus, oh yeah, I was vaccinated (J&J).

Tuesday and Wednesday sucked, there’s no way to sugar coat it.  But we had visitors coming to the office, so I felt obligated to be there.  I even wrote one of them, “I’m sick and will be keeping my distance, but don’t worry it’s not COVID since I’m fully vaccinated.”

Wednesday night I went home with a raging headache and went straight to bed.  Before I passed out, I googled “Delta variant symptoms.”  You know what the first symptom listed was?  Runny nose.  I booked a rapid test for the next morning.

On the way to the rapid test, I felt the worst I had all week.  That’s why I was so excited when I got pulled over for having an expired tag.  I masked up while I spoke to the officer and he let me off with a warning.  Unfortunately, the testing site called and said I had missed my window so I would need to just wait and see if they had a spot open up.  This was great news because at the top of my list of stuff I wanted to do was sit in a parked car in a CVS waiting to see if they could find time to jab a Q-tip up my nose.

My random thoughts on this experience:

Some of you may recall that I had a simple game theory exercise when J&J became available before Pfizer/Moderna.  Do I take the less effective one now?  Or wait a couple of months and take the more effective ones?

I chose to take the J&J and, upon reflection, would do the same if presented with the same scenario.  Firstly, every behavior since the pandemic has been about stacking the odds in my favor as much as possible.  Getting a vaccine improved my odds, even if not to 100%.  Sure, I caught it a week ago but how many other times have I been exposed to it since March and not contracted it?  How many fewer people have I spread it to because of that?  J&J has been extremely effective at eliminating hospitalization and death and I’m not writing this from a hospital bed, so that should make the flatten-the-curve crowd happy.

I stacked the odds as much in my favor as possible, went to an event I knew was higher risk than sitting at home, and got it.  Thems the breaks.  I would do it the same way all over again.  Maybe that’s the fuzzy brain talking, but I don’t think so.  My take all along has been I can’t stop living out of fear of COVID.  When there is something important, I am going to do it and will deal with the consequences.  It worked for 15 months and then it didn’t.  I always knew that was a possibility.

But I’m also a big believer in data, so I’m going to see if I can get that A+ stuff Pfizer is pushing so I can go back to Florida, embrace the humidity, and apologize to the entire state!

By now you know the economy added 850k jobs last month, better than the expected 720k.

Leisure and hospitality accounted for 343k of the jobs created.  This sector has recovered about 73% of its job losses from a year ago.  The government added 188k jobs, of which 155k came from teachers, bus drivers, and other positions for the fall re-opening.

We are on a much faster pace to recover lost jobs than after the financial crisis, which is Exhibit A on why the government was right to go all-in on stimulus.  The NYT’s had a good graph helping to illustrate how much faster this job recovery has been. 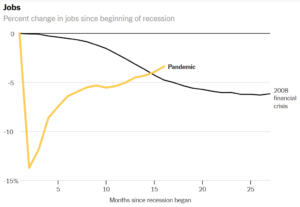 The biggest difference I notice between this recover and the GFC is wage pressures.  After 2010, it always felt like the employers were in control and job seekers were grateful for any work.  This time around, roles have reversed.  Job seekers are so confident in the recover that they are enjoying enhanced unemployment for as long as possible, confident positions will be available when those expire.

This will be interesting to watch.  Will employees retain control of this dynamic over the next year, or is this a temporary disruption while we re-open?  Will wage pressures subside when private employers no longer have to compete against Uncle Sam?

Why did rates drop if the job report was so strong?

The recent drop in rates is really a signal that the market could be conceding inflation is likely to be transitory.  At current yields, if inflation averages 2.50% for the next decade, a 10 Year Treasury would lose 11% of value.

The market isn’t stupid and isn’t in the habit of taking 11% losses.  If it felt that was the most likely outcome, there would be tremendous amounts of selling and rates would rise.  With the 10T at 1.45%, this suggests the market does not expect inflation to be persistently high.

I’m not sure this view lasts.  The market is also temperamental, and if we see headline inflation data well into Q3, it might get nervous again.  It’s easy for me to be patient and say, “Call me in a year if inflation is still above 3%”, but the market has real money riding on it.  This makes it susceptible to knee jerk reactions.

Here are the 3 things to keep an eye on to help determine if inflation is going to be transitory:

But here’s the 5 year forward expectations.  2.17% – about as boring as a SoCal weather report.

Even if the Fed is wrong and inflation persists more than expected, what is the probability it is wrong by a lot?  We keep treating this like a binary outcome – the Fed will be right or wrong.

Core PCE hit 3.4% for the first time in 30 years.  The Fed is betting on that calming down, and for now, the market is in agreement.  How long and how high before the Fed is forced to do something drastic?

Pretty light week, with the headlines probably coming out of the FOMC minutes on Wednesday.