Why Caps Are Suddenly So Expensive

Over the past several weeks, many floating rate borrowers have been shocked to find the cost of their interest rate caps rise dramatically over as little as a few days.  Below, we’ll dig into three of the recent changes in the market that are influencing higher cap costs.

The primary component of a cap’s premium is rate expectations, which can be expressed through swap rates.  Below is a graph of how the 2yr swap rate, which is simply what markets expect LIBOR to average over that period, has changed recently.

To provide an order of magnitude of the change’s impact on cap costs, the quotes shown in green are the estimated premium for a generic $25mm 2.00% at several points over the past few months.

Now here’s that same graph but on 3yr swap rates.

To put the recent rise in 2yr and 3yr rates into perspective, below is a graph of what the 10yr Treasury yield would look like if it moved in the same proportion as short-term rates did this year.  What would the market’s response have been if the 10T climbed to 4.5% in the past month?

In some cases, 3yr caps are multiples more expensive than 2yr caps.  The reason for this is partly attributable to the forward curve being upward sloping, but the primary driver has been term premium.

As a trader looks further out, they become increasingly less certain of the path of rates and charge accordingly.  Below is a graph illustrating the proportion of a cap’s total premium the final year makes up and how it’s changed recently. 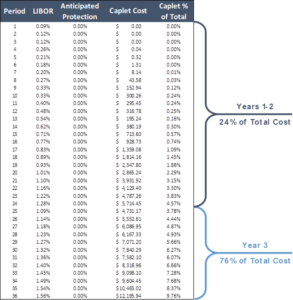 Last but not least, the wild swing in rates in recent months have sent volatility exponentially higher.  As volatility increases, traders’ cost to hedge climbs, which leads to increased premiums.  Below is a graph of how volatility has risen in the past year.

Borrowers planning to purchase an interest rate cap in the near term have unfortunately been caught in the perfect storm of rapidly rising rates and heightened uncertainty.  As a part of our involvement in placing a cap, Pensford will help keep track of your cap cost and monitor market events that could lead to shifts in pricing.

For a quick estimate, download our cap pricer.  For a more precise quote, feel free to reach out to the Pensford team at capteam@pensford.com or call (704) 887-9880.