Why the Coronavirus Inverted the Yield Curve

The Fed was slightly more dovish than expected at Wednesday’s meeting, but still expects to be on hold this year with an eye to resuming hikes next year.

The actual statement itself only changed two words:

The change to the language around inflation is intended avoid confusion about the Fed’s objective.  Will they consider hiking if inflation is approaching 2.0%?  Or only if it actually hits 2.0%?  This tweak, coupled with Powell’s Q&A afterwards, suggests inflation will actually need to hit 2.0% before the Fed hikes again.

That’s happened exactly two times in the last decade, and in both cases inflation barely breached 2.0% before falling again.

Powell expects hopes inflation climbs this year and will keep rates on hold all year just to ensure it’s not a temporary blip like before.  The market disagrees and still expects one cut before year end.  Either way, it is clear that the Fed will not hike in 2020 and that the next move is more likely to be a cut than a hike.

The Fed also committed to extending not-QE through at least April…but they didn’t say of which year.  Clever.

The spread between 3 month T-bills and the 10 Year Treasury went -2bps late in the week.

The 10T is withing spitting distance of all-time lows.  Is this a reaction to the concerns of a coronavirus epidemic?  Or FOMC monetary policy?  Both?   Toss in Brexit, inflation data, and impeachment news and it feels like there were too many variables to pin it one just one thing.

My initial thought was that the market is overreacting to the coronavirus news.  Classic flight-to-safety-knee-jerk-overreaction, rates will rebound if we can get a grip on containment.

But the traders I spoke with were legitimately concerned about the long-lasting effect.  Sure, the 35bps drop in the last few weeks was re-positioning to avoid getting steamrolled in the event the news got much worse.

But longer term, the virus has the potential to pull the global economy into a recession.

RIA had an interesting piece that analyzed the effect that SARS had on financial markets.  While there was a material effect, it was also short lived once the spread was contained – about four months.  Markets are forward looking, so containment today means we can turn our attention to the future. 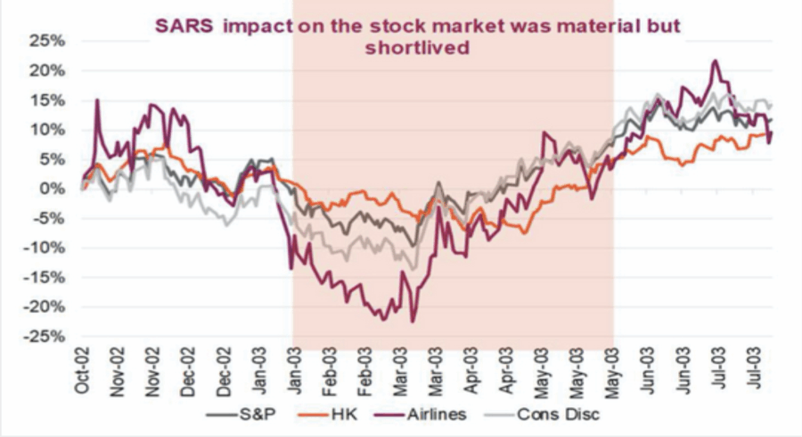 But then RIA pops the little hopeful bubble they created by pointing out that the starting point came after the dot.com crash.  In other words, asset prices had already dropped significantly (50%) before SARS hit.  The correction had already come. 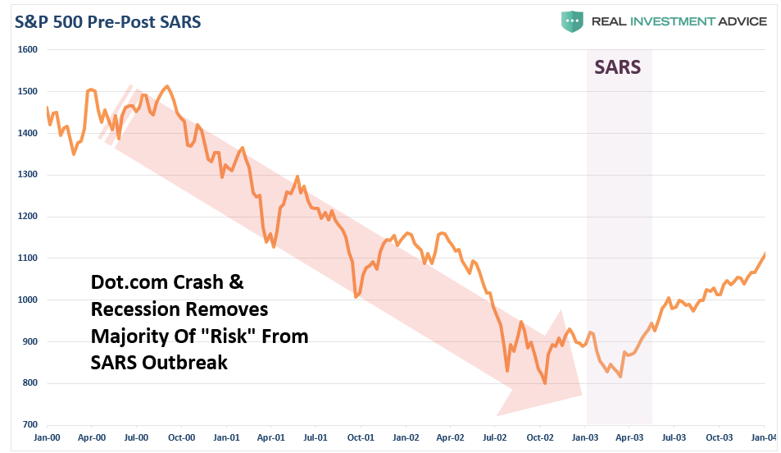 Alternatively, current asset prices (if you haven’t noticed) are at all-time highs.

Furthermore, China is a much bigger player in the global economy than it was in 2002.   China is the second largest economy in the world today, but in 2002 it was just sixth.

More importantly, China today makes up as much of the world economy as Japan, Germany, India, and France combined.

Travel and tourism alone account for nearly 11% of Chinese GDP.  You think tourism might be impacted by this news?

Now think about all the parts made in China.  All the shipping that comes out of China.  Freight.  Commodities.  The list goes on and on.

Asset prices have dramatically more room to fall today and China dwarfs other economies and China is more interwoven with global supply chains and China is already weakened from a protracted trade war and China’s central bank spent a lot of dry powder last year trying to appear strong in negotiations and we don’t trust “official” stats from China so it could already be worse than they are admitting publicly…I think you get the point.

Last year we worried about a trade war dragging China into a recession.

The longer this drags on and the worse the headlines get, the more likely the 10T sets an all-time low.

Another week full of economic data to pile onto coronavirus headlines.  Manufacturing and Friday’s jobs report will be the economic main events, but they will take a backseat to news out of China.