Many borrowers use forward curves to help project interest rates over the life of a project. The following graph illustrates how accurately the market predicts LIBOR for the next five years at any given time.

The blue line is LIBOR.

The grey lines are forward curves, meaning what the market thought LIBOR would do for the next five years. 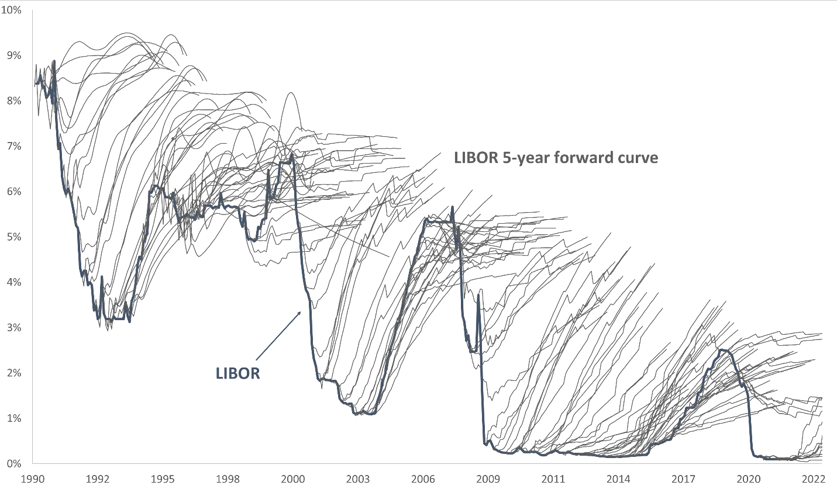 The following graphs quantify the historical difference between fixed and floating rates over a variety of tenors.

Swap vs What LIBOR Ends Up Doing
Blue Shade – LIBOR
Gold Line – Swap Rate
Gray Line – this is the most important aspect of this graph.
- This line is what the floating rate averages over the next two years.
- In other words, if the gray line is above the gold line, you would have been better off locking in a fixed rate on that day.

Given the complexity of this graph, let’s select a data point and use it as an illustration. Look at late-1998, when all three lines converge at roughly 5.70%.

Gold Line – borrower could swap to fixed for two years at 5.70%

Conclusion – On 8/1/98, regardless of whether the borrower remained floating or swapped to fix, they paid 5.70% for the next two years. 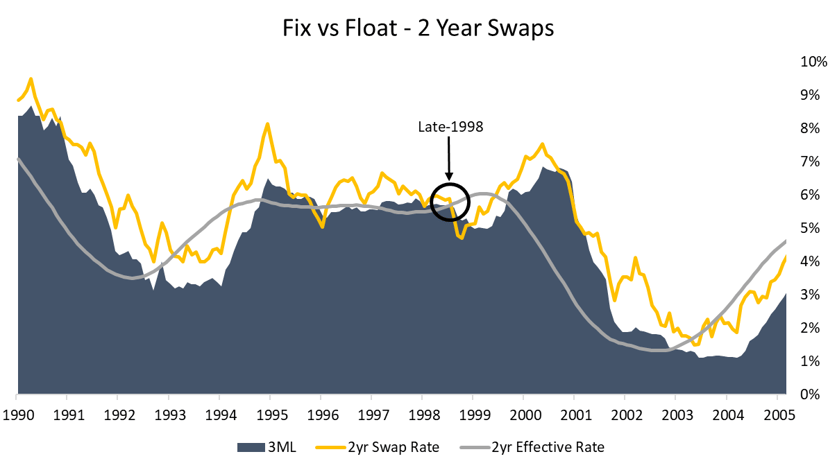 Now take a look at a different time horizon – 2007

Gold Line – borrower could swap to fixed for two years at 4.66%.

Conclusion - this borrower had a difficult decision to make on 10/1/07 because the fixed rate was actually lower than the floating rate. If they remained floating, however, they ended up paying an average interest rate of just 2.50% because the Fed cut rates dramatically during the Great Recession. 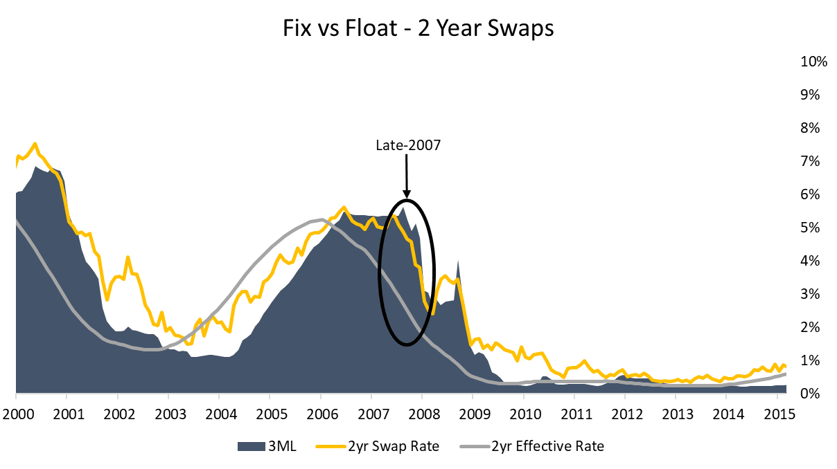 With the tutorial for this graph under our belt, let’s shift gears and take a look at another graph that illustrates the point above.

This graph helps to quantify the cost borrowers paid over the term by fixing the rate. We used swap rates to represent the fixed rate.

When the cost is negative (the red bars in the graph below) a borrower would have been better off fixing the rate instead of staying floating.

This graph really aggregates the information from the graphs above and more simply illustrates three things:

- the cost/savings from fixing the rate

- when was the best time to fix the rate 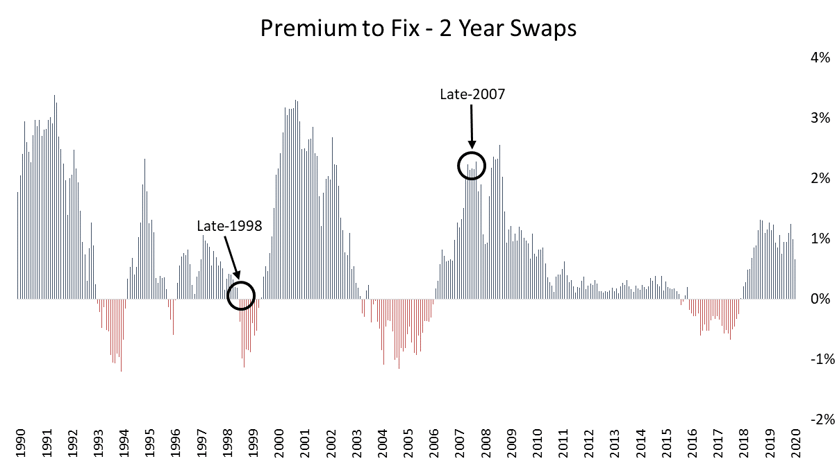 With a better understanding of what these graphs illustrate, let’s look at how this analysis compares over different tenors beginning with the two-year graphs we just examined 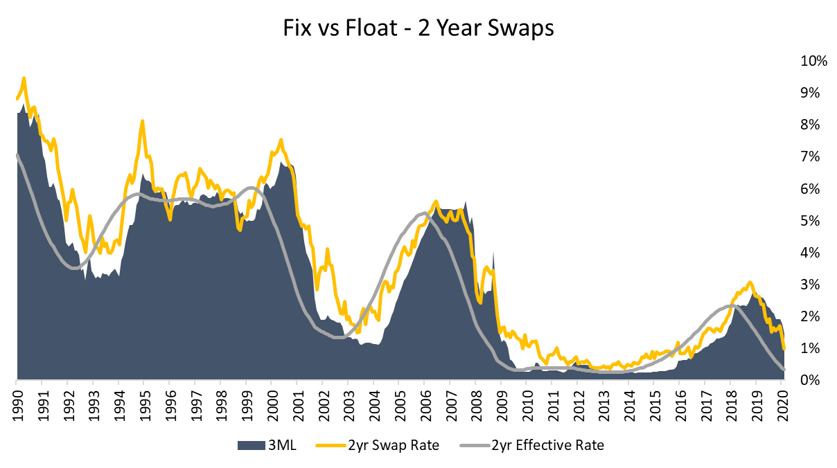 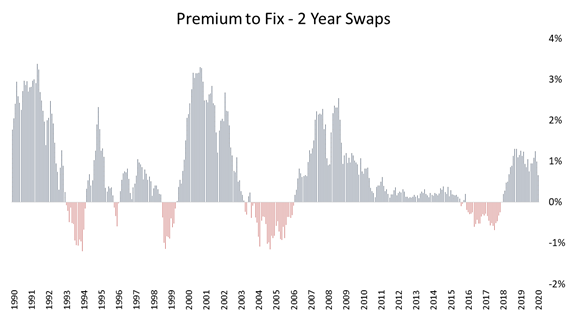 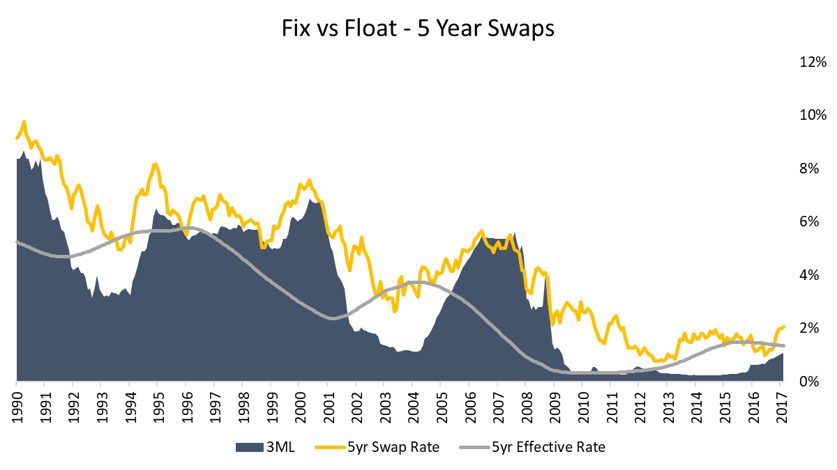 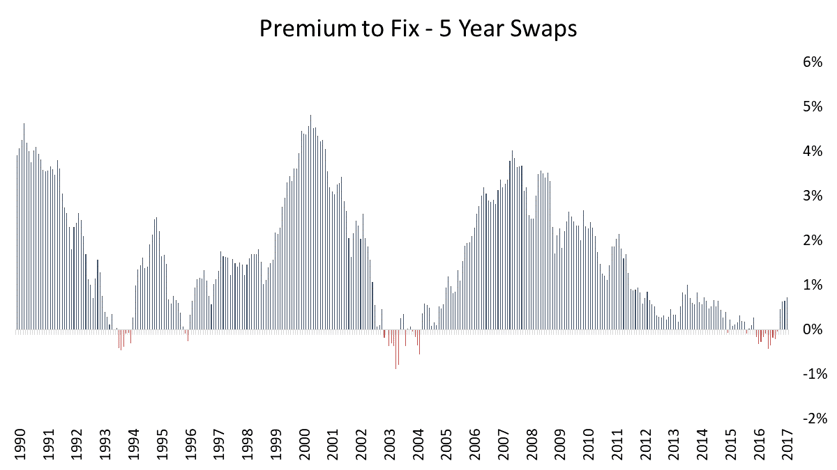 - It has never been less expensive to fix the rate
- the maximum savings by floating was 4.70% annually over the next ten years 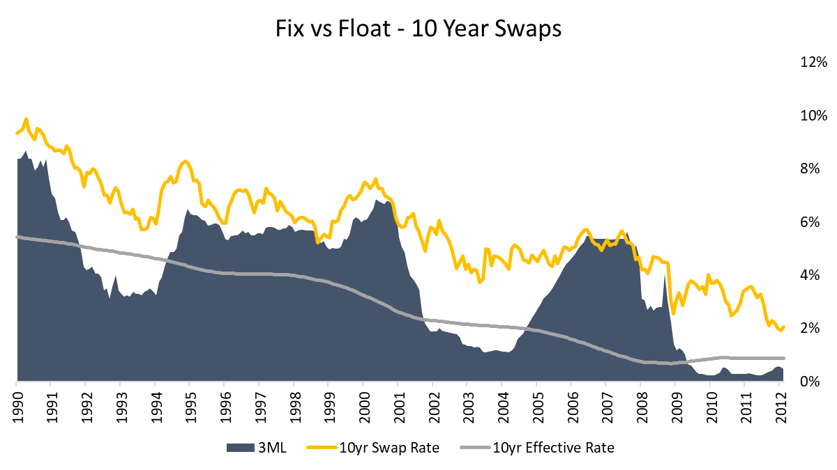 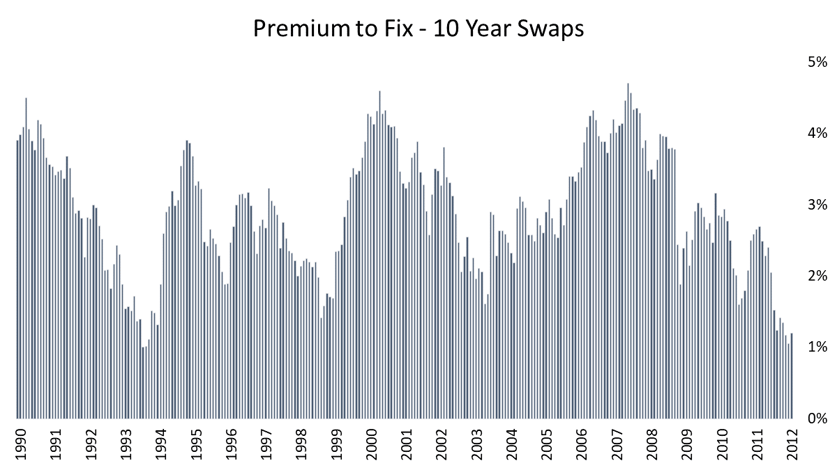 Generally, the market dramatically overestimates the path of Fed Funds. This explains why borrowers that remain floating generally save money vs the fixed rate alternative.

- The most notable exception to this, however, is during a tightening cycle. When the FOMC is hiking interest rates, the market tends to underestimate the path of Fed Funds.


Asymmetric risk/reward - the magnitude of savings when floating is substantially greater than when fixed.


The longer the term, the greater the likelihood of that floating interest rates will save money relative to the fixed rate alternative.

With cap pricing up and the curve flat, many borrowers who traditionally opt for floating debt may...