Despite Prime being a common index for floating rate loans, we rarely see the placement of a Prime based interest rate cap.  Caps placed on Prime usually come at a premium to LIBOR or SOFR, leading many borrowers to seek out alternative ways to hedge their interest rate risk.  Here, we’ll explore how to hedge your Prime based financing in the most cost-efficient way possible.

But first, a quick refresher on the Prime index.

A bank’s prime rate is the rate at which they lend to their most favored customers.  The published Prime index, frequently referred to as WSJ Prime, is determined by surveying 30 of the largest banks.  When three-quarters of those banks change their rate, that new rate is published.

LIBOR represents the rate banks can borrow from each other and is determined by surveying more than a dozen banks, then taking a truncated average of their responses.

Although not directly controlled by the Fed, Prime always moves in lockstep with the Fed Funds ceiling set by the FOMC.  Prime is reactive, meaning it only changes after the Fed hikes or cuts, whereas LIBOR is proactive and moves in anticipation of a rate change.

Because both LIBOR and Prime track Fed funds, they’re highly correlated.  The general rule of thumb for determining Prime is Fed Funds + 3.00%.  Here’s a graph comparing the two indices over the past three decades.

Historically, LIBOR has also tracked Prime by a spread of about 3.00%.  Due to the proactive/reactive nature of the two rates, they tend to disconnect slightly ahead of Fed policy changes before settling.

The below table outlines their average spread over time.  The most notable divergences are usually driven by major economic events or when the market is highly volatile. 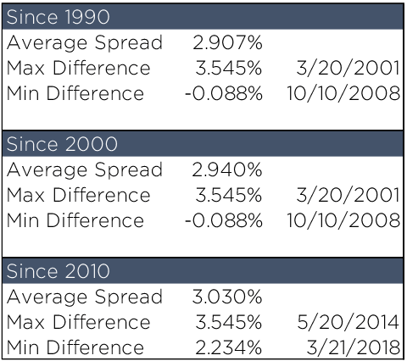 So… Why Not Just Buy a Prime Based Cap?

Unlike LIBOR, there are limited Prime futures and few banks are willing to offer Prime caps.  The banks that do are still hedging their risk using Eurodollar futures the same way they would on a LIBOR cap but charge for the basis risk they face.  To compensate the bank for the additional risk, Prime hedges generally trade at a considerable premium to their LIBOR equivalent.

Check out the pricing grids below comparing the cost of a $25mm, 2-year term cap.

Borrowers can avoid paying the additional premium by instead purchasing a cap at the “LIBOR equivalent strike.”  This is as simple as subtracting the historical average spread between the two indices from the desired strike on Prime.

Let’s say the borrower wanted to cap their Prime rate loan at 5.00%.  If, in this above example, Prime were to reset at 5.50%, the borrower could expect LIBOR to reset around 2.50%.

By instead capping LIBOR at 2.00% (the LIBOR equivalent strike), the borrower would still receive around 0.50% in coverage back from the bank without having paid the increased price for a Prime based hedge.

But What if LIBOR or SOFR Disconnects from Prime?

Purchasing a cap on LIBOR at the equivalent strike does present some basis risk to the borrower, creating an imperfect hedge when the spread between the two indices isn’t precisely 3.00%.  When the spread is higher, the borrower is underhedged and vice versa.

Nonetheless, when comparing the increased premium to the potential mismatch, it’s generally most efficient cost-wise for borrowers to purchase the cheaper hedge and hold the basis risk internally. 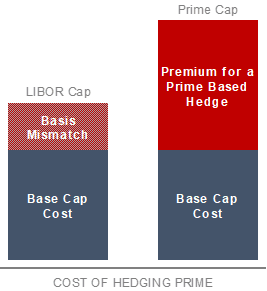 As illustrated above, the increased interest expense from any basis mismatch between LIBOR and Prime is usually substantially smaller than the premium a bank would charge to place a hedge based on Prime.

LIBOR and Prime are both highly correlated but will sometimes diverge around major economic events or when the market anticipates changes to Fed policy.  Because Prime based caps are sold at a premium, borrowers could instead purchase a LIBOR cap at the equivalent strike for a substantially lower price.  The hedge would still be highly effective and accomplish the overall goal of putting a ceiling on interest rates.

Alternatively, if you need to put a quick number on the potential cost of a cap, check out our cap pricer.