Frequently, CRE borrowers who are considering capping and swapping ask about collars. A collar is where a borrower buys a cap at a certain strike and sells back a floor to the bank helping offset the cost of the cap. This creates a floor and a ceiling on the floating rate, which resembles a collar. The value of the floor will often match the cost of the cap resulting in a “costless collar”. Here’s an example.

In lieu of coming out of pocket $650k, the bank solves for the strike on a floor which has the same value so that the hedge is costless.

If rates remain between 2.35% and 3.50%, neither the cap nor floor come into play. For those who like a visual, the resulting hedge looks like this. 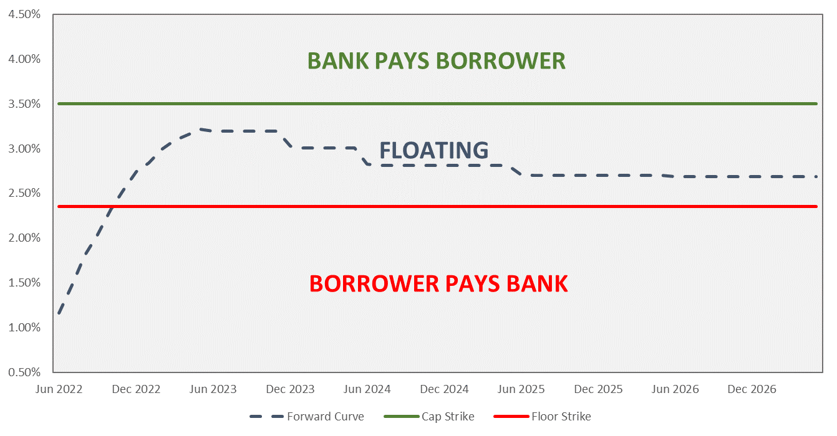 Before you jump to lock one of these bad boys in, consider the following – by selling a floor to the bank, you now have a potential future prepayment penalty AND you have to begin paying on the floor if rates go back below it.

Since collars give you a range to float in, they’re frequently viewed as less restrictive than a swap and generally have smaller prepayment penalties. However, most borrowers who dislike swaps will dislike collars for the same reasons.

If a collar is terminated early, any potential breakage is based on the market value of the cap and floor.

Here’s an example of a collar early breakage grid.

Some other notes about collars:

Collars are another option in the hedging toolbox that frequently make sense in rising rate environments but should be carefully weighed against alternative structures such as a cap or corridor.