In September, we wrote “Inflation Ghost Stories”.  We borrowed the phrase from Minneapolis Fed President Neel Kashkari.  The premise of our article was that inflation fears are consistently overblown and we should stop making decisions based on the perceived threat of a factor that never materializes.

We are going to see signs of inflation this year.  There will be reports north of 2.0%, perhaps far north.

But elevated inflation will not be sustainable.  In Fed parlance, inflation this year will be “transient”.

The 10 Year Breakeven Rate implies what market participants expect inflation to be over the next 10 years on average.  Graphs like this were making the rounds last week.  When my 90-year-old grandmother in central PA is asking me about breakeven rates, I know things have gotten out of hand.

It’s easy to understand why.  Stimulus.  Vaccine.  QE.  Deficits.  Take a look at the spike in money supply (M2).  How could this not result in inflation?

I’m glad you asked.  As we have written about ad nauseam, inflation hit 2.0% just twice in the post-financial crisis decade.  Two times.  And that was with $4.5T in QE and 0% interest rates.   It’s not like current policies are a novel approach.  Here’s inflation since the Financial Crisis.

We decided to look at how the WSJ was reporting on inflation leading up to those two periods, 2012 and 2018.

We’ll start with 2012, with the 10 Year Breakeven Rate hitting 2.75% in late 2010 (reflecting expectations that inflation would be rising in the coming years).

The opposing camp believes the combination of low rates and more than $1 trillion the Fed has pumped into the financial system is a formula for inflation down the road. “As the economy improves and as lending picks up, the longer-term challenge we face will not be worrying about inflation being too low,” Philadelphia Fed President Charles Plosser said in an interview. “The risk is really to the upside of inflation over the next two to three years.”

Consumers see more inflation ahead. That view puts them at odds with Federal Reserve officials and private sector economists.

According to Friday’s consumer sentiment survey released by Reuters/University of Michigan, inflation expectations have been rising since late summer. Back in September, U.S. consumers expected the inflation rate one year out to hit 2.2%. In early-February, the one-year expected inflation rate is up to 3.4%.

Prices rose more than expected for U.S. consumers last month, offering fresh evidence that a long run of exceptionally low inflation is ending and teeing up the expected first interest-rate increase of the year in March.

Feb 23, 2018 – Why the Inflation Picture Looks Starkly Different for Businesses and Consumers5

“We’ve seen pickups in producer-price inflation before that haven’t really fed through to higher consumer prices, but there are good reasons to expect that the story this time around could be a bit different,” said Michael Pearce, economist at Capital Economics.

The higher prices have effectively ended a long period of low inflation that led the Federal Reserve to keep short-term interest rates near zero for years.

“We think 2019 will be more inflationary than we have seen historically since the recession,” Kellogg Co. Chief Executive Steve Cahillane said in an interview Wednesday.

“These are all things that point to prices going up,” said Diane Swonk, chief economist at Grant Thornton. “We might see a pop of inflation in the first quarter.”

“This pickup in inflation is coming from strength in the domestic economy,” Barclays economist Blerina Uruci said. The bank predicts core U.S. inflation, which excludes energy and food prices, will reach a post-recession high next year.

A year later, inflation was actually down 0.2%.

How will that story look a year from now?

Three reasons why you shouldn’t believe the inflation hype this year.

The graph below is the Forward Inflation Expectations minus Actual Inflation.  When it’s above 0%, we have overestimated inflation.

In fact, the only times we underestimate inflation is during sharp downturns when it fails to collapse as much as expected.

In other words, inflation expectations swing more wildly than actual inflation.  Actual inflation over the last twenty years has traded between 0.90% and 2.50%.

The last time inflation hit 4% was the year MC Hammer was singing “U Can’t Touch This” and “Pretty Woman” hit theaters (1990).

The last time inflation hit 3% was 1992, when Basic Instinct was making leg crossing headlines and Achy Breaky Heart was squaring off with Baby Got Back for the top song of the year.

So yeah, it’s been a minute.

The Bloomberg rates strategy team put out an interesting research piece that highlighted how unrealistic the current 10 Year Breakeven Rate is when you consider the “Rent of Shelter” component.

Historically, Rent of Shelter comprises the vast majority of CPI.  Just as importantly, it has historically been a very low volatility data point.

In order for the current 10 year breakeven rates to materialize, Rent of Shelter would have to grow 50% faster than it did in 2019.  In the graph below, the yellow line on the far right is what would be needed in order for actual inflation to match inflation expectations. 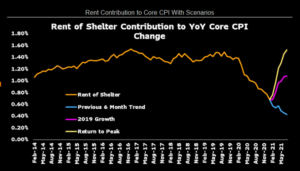 Sure, maybe that happens, but it will require an unprecedented increase in housing costs.

We still have 10mm more unemployed Americans than we did a year ago.  The real unemployment rate (U6) is still north of 11%.

Sure, we have corrected much faster than post-financial crisis, when it took six years for the U6 to get back to 11%.  But I think it’s more likely that we have experienced the snapback after the initial shock, and the rest of the gains will reflect the more typical grind.

If historically low unemployment couldn’t create inflation pre-COVID, how much of a drag will high unemployment be?

The youngins, those that graduated in 2008 or later, have literally never experienced 2.2% inflation.  They’re a bit like, “what’s the big deal?”

Globalization.  Technology.  Aging demographics.  I don’t have any clue why inflation isn’t materializing, but it’s time to acknowledge that something has fundamentally changed and stop panicking about inflation.

There will be a lot of inflation headlines this year, probably coupled with explanations about why this time is different.

But it probably won’t be.

Be vigilant.  Monitor developments.  But let’s not overreact to the first headline that comes out about inflation above 2%.

Markets were closed yesterday.  We get some inflation data, Fed minutes, and manufacturing data, but all eyes will be on the stimulus package now that impeachment is behind us.