The two-day FOMC meeting culminates Wednesday afternoon with a statement and press conference.  Here the 5 things to keep an eye on.

#1 – A Statement to Expect a Statement

A Bloomberg survey last week of 50+ economists expect a formal announcement of tapering at the November 3rd meeting, with tapering beginning in December. 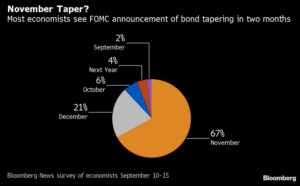 Although it won’t matter much in the grand scheme of things, I think there’s a chance the announcement doesn’t come until the December 15th meeting.  The November meeting doesn’t have a press conference and Powell generally likes to coordinate big announcements with Q&A sessions.

The Fed has done a masterful job of removing the risk of a Taper Tantrum 2.0, so whether it officially tapers in November, December, or January is largely irrelevant.

But the Fed will probably set the stage this week to expect a more formal statement about tapering soon.

#2 – The End of Tapering is More Important Than the Beginning

The Fed is buying up $120B/month in Treasurys and mortgages.  Tapering will reduce this amount monthly, probably by about $10B-$15B per month.  The last time the Fed tapered, it wound down QE over 10 months. This time around, it’s likely an 8-12 month timeline.  In other words, tapering will occur over most of 2022.

I think the Fed will begin working hard to signal that the end of tapering should not be interpreted as the start of hikes.  That signaling will start this week.

I expect some sort of language that says tapering is appropriate, but that rate hikes are a long way off.  Powell will work to decouple the two.

Following tapering in 2014, the first hike occurred more than a year later.  But that was a misstep, and the Fed didn’t hike for another year after that.

The first hike probably won’t be for at least a year following the conclusion of tapering.

#4 – Those Friggin’ Dots Will be the Story This Week

At the last SEP meeting, 7 out of 18 FOMC officials were projecting a rate hike in 2022 (yeah, next year) – and inflation has been coming out higher since that last survey.  If just two members shift a hike into 2022, the median projection will include a hike next year.

Don’t be surprised to read a headline Thursday morning talking about how the Fed is projecting rate hikes next year.  If that’s the story, it’s because of the dot plot, not anything Powell will say.

We’ve addressed this repeatedly, but not all dots are created equal.

Notice how the current dot plot ends in 2023 with two hikes, while anything beyond that is simply the “Longer Term.”

The updated dot plot this week will include 2024, with everything thereafter being classified as the “Longer Term.”

I think the median forecast will imply 5 or 6 hikes by year end 2024, which probably puts about three of those hikes in 2024.

The good news for floating rate borrowers is that closing a 3 year loan today means you probably won’t see LIBOR higher than 1.00% before maturity.

Primary dealers were surveyed for 10T year end forecasts, with the average being 1.69%.  This FOMC meeting alone won’t cause that sort of spike, but it has the potential to be the first step towards pushing yields higher. 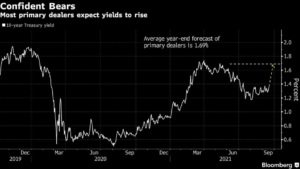 The Fed meeting, which will also include an updated Summary of Economic Projections (SEP), which is the Fed’s forecast for economic data like inflation, GDP, and unemployment.  The Fed will have to acknowledge higher than expected inflation while reiterating this surge is temporary and will fade over 2022.