The official press release reiterated much of the same sentiment from the previous few meetings - general economic growth has been modest, the labor market remains strong, and the FOMC remains committed to bringing persistent inflation down to their 2% target over the longer run. However, markets immediately reacted to the following sentence being added to this meeting’s press release:

“In determining the pace of future increases in the target range, the Committee will take into account the cumulative tightening of monetary policy, the lags with which monetary policy affects economic activity and inflation, and economic and financial developments.”

Powell repeated this change to the press release in his opening statement during the post-meeting conference.

The Fed acknowledging here that the full impact of hikes has yet to be felt could be the first step in preparing the market for them to take their foot off the brakes. They want to assure the market that the effect of cumulative hikes will still drive down inflation even if they hike less than 75bps at the next meeting.

Rate projections have remained materially unchanged overall in the short run, but markets are now only pricing in a 25% chance of a 75bp at the December meeting, down from the 45% that was priced in prior. 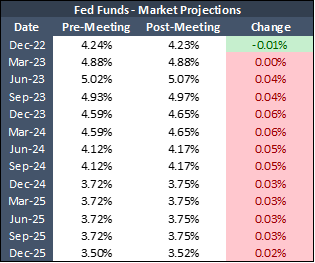 Equities initially reacted optimistically with the Fed outlining their efforts to account for the cumulative effects of tightening monetary policy, but Powell’s commentary quickly soothed the enthusiasm. Many US indices flipped bearish following volatile swings intraday with the S&P and tech heavy Nasdaq flushing 2.5% and 3.3% at the closing bell, respectively.

Powell emphasized that the effects of tightening has been felt most substantially by the housing market but warned that it will take much longer for the effects to take hold on inflation.

So, impacts on inflation lags tighter monetary policy but by how long? When asked this question, the Fed Chair outlined the following timeline, noting that historically, the time between rate hikes and easing inflation have seen "long and variable lags:”

As shown in the graph below, financial conditions have remained restrictive since September and anyone in real estate today can attest to economic activity being suppressed.

Powell also noted that financial conditions react in anticipation of changes to monetary policy, meaning to some extent markets only believe the Fed will continue to hike to tighten in order to ultimately drive down inflation. Even if the Fed believes they won’t end up hiking as high as expected or keep rates elevated for as long, don’t expect Powell to start discussing rate cuts any time soon.

He was also very deliberate in making clear that more hikes are to come and that, although they could come at a slower pace (à la 50bps), they won’t be pausing, much less cutting anytime soon.

“Let me say this: It is very premature to be thinking about pausing.” – Jay Powell

If a rate hike pause is actually on the horizon, there may be some light at the end of the cap pricing tunnel. Check out the below chart, illustrating how cap prices have behaved once the Fed stopped hiking in the previous four tightening cycles.

On average during the past four cycles, cap costs:

If today’s forward curve is even close to accurate and those cumulative rate hikes start to take hold of inflation, then floating rate borrowers could finally start seeing some relief on their cap costs next year.

The Fed is still far from dovish, but Powell has opened the door for a slower pace of rate hikes at this meeting.

While the pace of rising floating rates could slow, this doesn’t mean that a hike pause or rate cuts are imminent, but could mean we’re nearing the peak.