This was an interesting report.  While the economy added 165k jobs, the consensus forecast was for closer to 200k.  Would seem disappointing, right?

But Friday’s report was offset by an upward revision to the last two months of 30k.  That brings the three month average to 208k and the twelve month average to 191k.  Most economists believe the economy needs to add about 100k per month to just hold the unemployment rate steady as the population grows, so we are still well above that mark and the longer term trends seem strong.

Additionally, poor April weather could be to blame for the softer than expected data.  Of the workers surveyed, 133k said they were unable to find work due to weather. That is nearly double the typical April survey of 75k.

Also, the BLS notes on its website that the monthly report can have a band of +/- 120,000 jobs.  Over the last year, revisions have averaged a net decrease of 11k jobs.

The unemployment rate hit an 18 year low – 3.9%.  But this was partially from a 240k drop in the labor force as the participation rate dipped slightly from 62.9% to 62.8%.  The Fed’s own projections put the UR at 3.8% at the end of this year, so it will be interesting to see if they update those projections at the June meeting.

Most interestingly, average hourly earnings were a little soft at 2.6%.  Average weekly earnings were down from 3.2% to 2.9%.  How unemployment could have a 3-handle and still show little wage pressure is a conundrum.

Bottom line – nothing earth shattering about this report.  The data is mostly strong, with some residual questions about wage pressures.  Nothing in this report should effect the Fed’s policy positions.

The Fed used a new word to describe its approach to inflation – symmetric.  The Fed said inflation is expected to “run near the Committee’s symmetric 2% objective over the medium term.”

Last week we highlighted the possibility the Fed would transition away from an explicit goal of inflation holding precisely at 2.0% and instead switch to a price targeting approach.  This approach, perhaps best described as inflation targeting with memory, attempts to make up for the recent undershooting of inflation.

Since we spent a decade with inflation below 2%, we should allow it to exceed 2.0% to compensate for that shortfall.

This should deemphasize the month to month inflation data since the Fed removed the reference to “monitoring inflation developments closely.”

It also gives the Fed some wiggle room to keep hiking rates even with inflation almost at 2.0%.  This should reassure markets that if inflation pushes above 2.0% in the coming months, it should not necessarily be interpreted as the Fed needing to hike faster than expected.

This message was interpreted (correctly, we believe) that the Fed is not anxious to speed up the pace of hikes.  The odds of a fourth hike in December didn’t really change (50%), but perhaps the risk of Fed Funds hitting some outlier landing spot (4%) have diminished.

Inflation – What Level Would Cause the Fed to Hike Faster Than Expected?

The Fed is suggesting it has some tolerance for inflation above 2.0%, but at what level would the Fed intervene and start hiking more aggressively?

The Fed has been beating a dead horse over the last year that inflation would eventually pop up again (they use the word “transitory” to describe the lack of inflation).  Their patience appears vindicated.  Core PCE came in at 1.9% last week and here’s how that compares to the last decade. 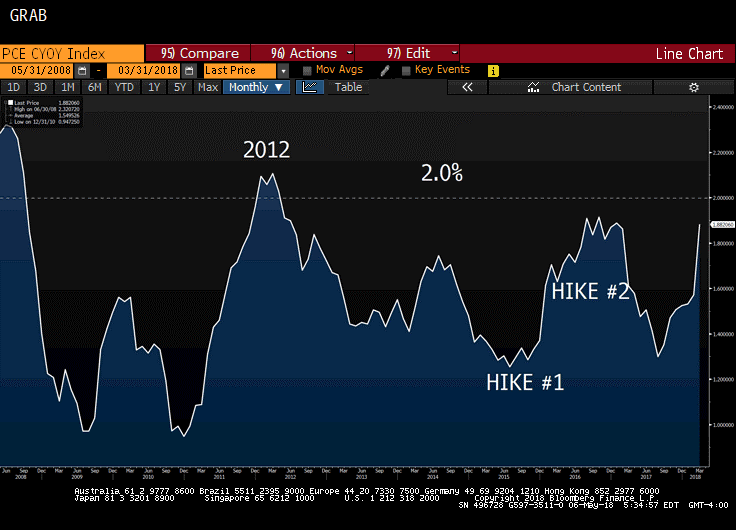 How the Fed interprets and responds to this will shape monetary policy over the next 18 months.

Look at this nice convergence between Core PCE (blue) and Fed Funds (white).  It certainly appears as though the Fed is doing a good job of gliding us into a soft landing. 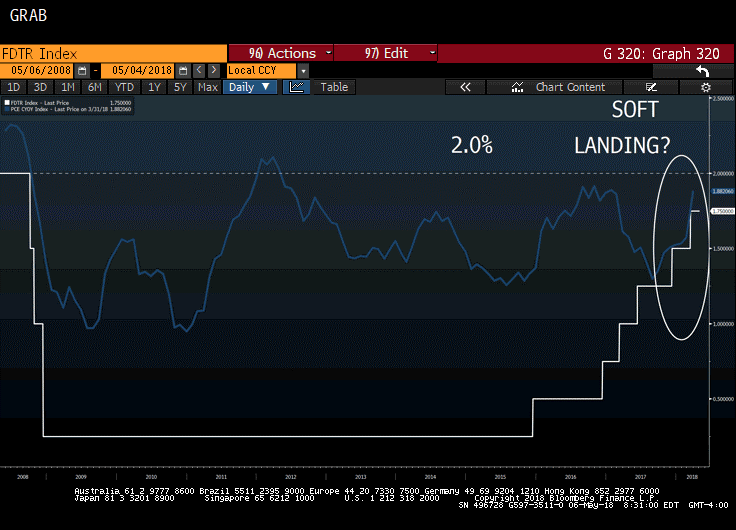 But over a longer period of time, the relationship between inflation and Fed Funds breaks down.

It seems as though there’s no easily identifiable correlation between Fed Funds and inflation. 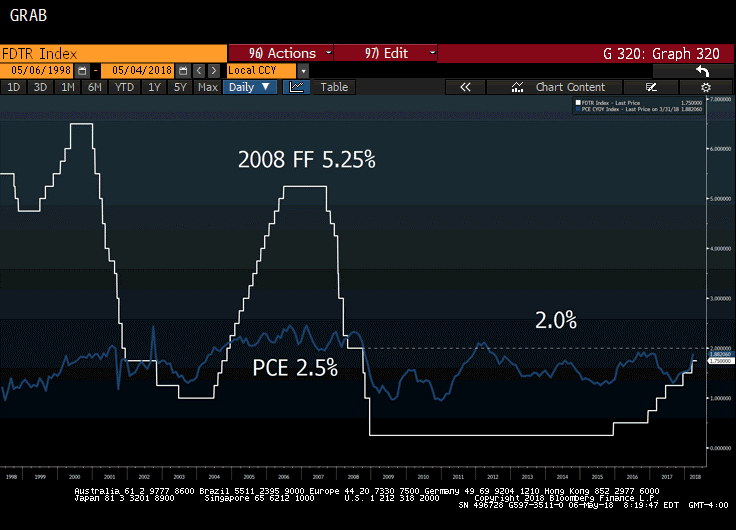 Absent bad news, we continue to believe there’s a chance the 10 year Treasury will break through 3.05% in the coming months.

The Treasury announced an increase to upcoming auction sizes, which coupled with continued balance sheet normalization should also apply some upward pressure on yields.  The Fed’s slightly dovish bent last week should also help give the long end of the curve to move up.

But if we are wrong, yield curve flatness should garner more attention.  The spread between the 10 year Treasury and the 2 year Treasury fell to just 0.45% – the lowest since 2008.

But 2008 probably isn’t representative of where we stand today because the yield curve was actually steepening as a result of the Fed slashing rates and the T10 didn’t keep pace.

A better comparison is probably 2004 when the Fed was hiking rates and the T10 didn’t keep pace.  The curve inverted in 2005 and we had a recession two years later. 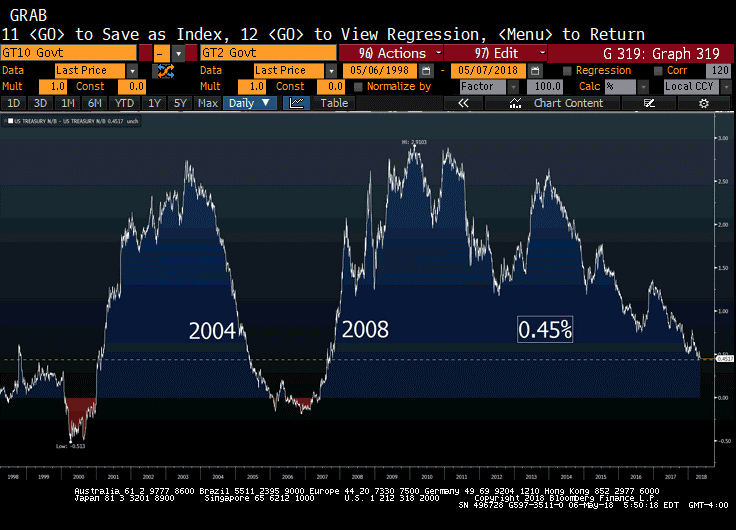 Quieter week ahead.  Inflation data due out Wednesday and Thursday, but not as significant as last week’s Core PCE.

More importantly will be Fed-speakers as they attempt to massage the Fed’s interpretation of last week’s meeting.