My sons primarily communicate with each other, sometimes while sitting in the same room, through memes.  I had no idea these had become their own language.  I got involved in a group text with them and couldn’t believe how much I loved them.  Like riding a scooter around Austin, I wanted to hate them, but I couldn’t!  And just like scooters, they can be very dangerous for old people like me.  Since my football teams played Thursday night (cough cough Eagles > Packers) and Friday night (59-0 PSU over Maryland), I found myself with enough free time to fall down a meme rabbit hole this weekend.  You’re welcome. 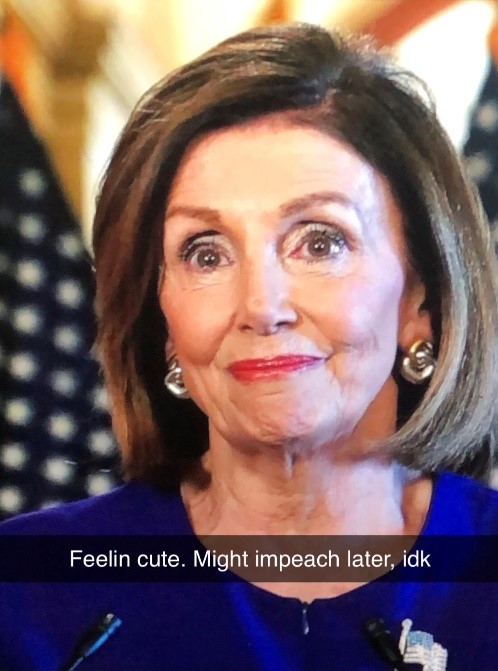 Yeah, it’s going to be one of those newsletters.

What Color is This Impeachment? 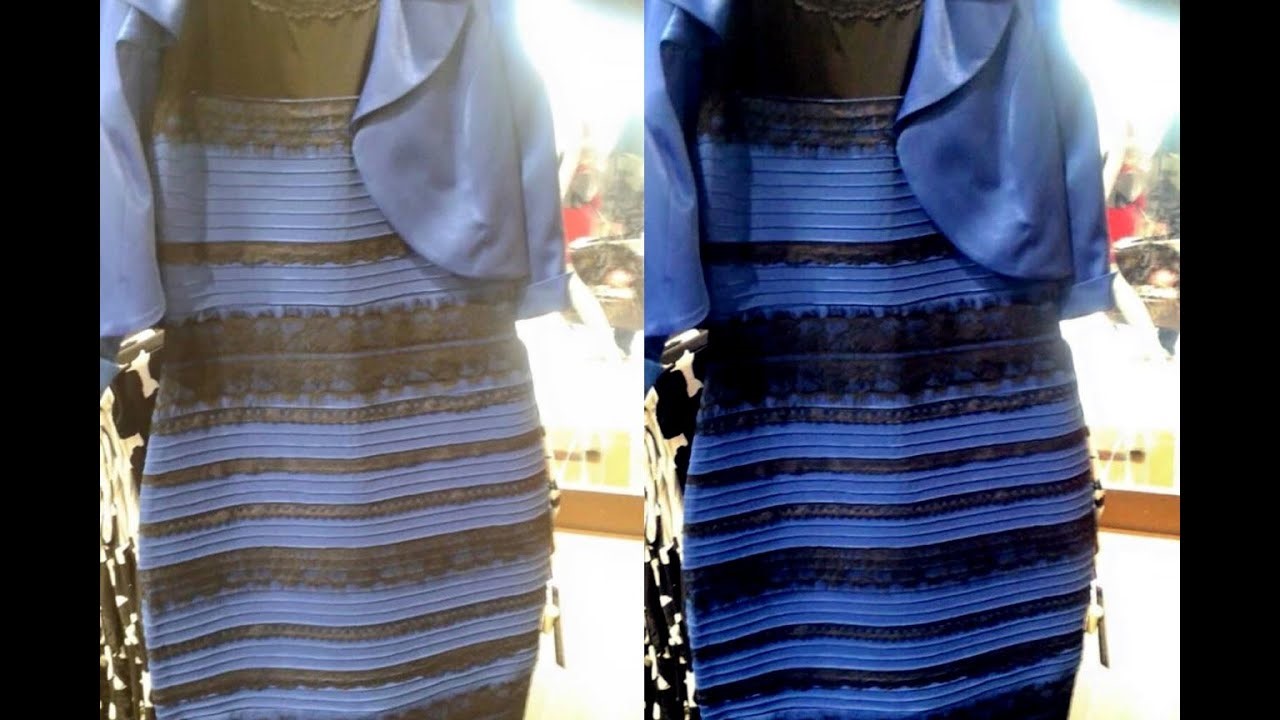 Like this dress, both parties look at the same impeachment inquiry announcement and see two different things.  Republicans think it will whip the base into a frenzy (because Trump’s supporters are known for being so apathetic), while Democrats think it be the one thing that finally sticks to the Teflon Don (because everything else has worked so well before).

Everyone wants to know – how will markets react?  Easy.

I have no clue.

Seriously, if you do, let me know.

But since a lack of insight has never prevented me from speculating, I won’t begin today.

The impeachment process will be lengthy, and that pesky democratic process called an election is barely more than a year away.  Trump doesn’t strike me like the type to resign out of embarrassment/shame, so it seems likely that any change in power would likely be from the 2020 election anyway.

How can the market focus on a political process when it has China, Europe, Brexit, and the Fed to worry about?  While the impeachment process may temporarily substitute for my daily soap operas, I just don’t a much effect on markets.  And Trump’s presidency has been characterized by almost daily controversy anyway.

If anything, the real impact is likely to be headline volatility.  A legitimate headline grabber (not a Wolf Blitzer “Breaking News” bs break in), could swing rates short term, but the impeachment process seems unlikely to result in a clear direction for rates. 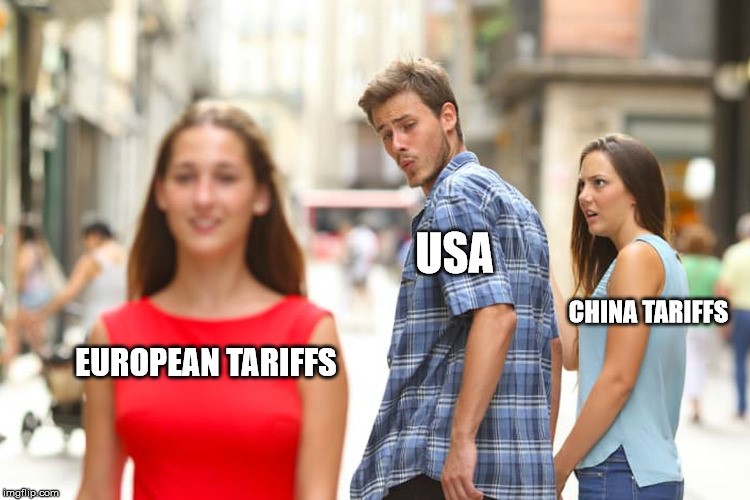 Just as markets were beginning to feel optimistic about a temporary halt to escalations, news on Friday that the White House is considering blocking investments in China and de-listing Chinese companies from US stock exchanges.

Trump is becoming increasingly anxious about the economy, so I am not sure he’ll pull the trigger if he’s hopeful about an October meeting.  Plus, it will be much harder logistically to implement capital controls like this.  I don’t view this as a likely outcome.

China’s GDP is set to drop below 6%, the lowest in three decades.  Therefore, both sides have incentive to reach an agreement.  If China was playing the long game and willing to endure a downturn through November 2020, the impeachment process may change that calculus.  China can play nice and let Pelosi & Co. go after the president and then make a decision after the elections.

It appears the band-aid resolution will incorporate at least three primary items.

The primary benefit of a cease fire would be to help settle markets.  Until previous tariffs are repealed, the impact will still be felt in GDP.  But markets will be happy with the de-escalation.

Unfortunately, we’re likely to start hearing more about tariffs on European goods.  In early 2018 (yes, 18 months ago), we ran articles on the effect that Bush’s tariffs had on the 10 Year Treasury.  We explained how a similar reaction with Trump’s tariffs implied a 1.95% 10T.  At the time I wrote that, the 10T was at 3.00%.

Bush quickly repealed the tariffs but filed a dispute with the WTO.  That decision, 15 years later, is due this week.

Rumors suggest that the US will win and allowed to impose tariffs on $25B worth of European products.  While not nearly as significant as the tariffs on Chinese goods ($500B), the psychological effect may partially offset the optimism on the China front.

Germany (read: ECB guarantor) Is Probably in a Recession 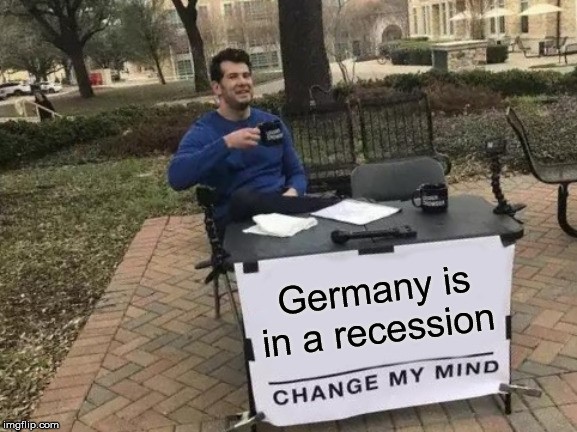 German GDP last quarter was -0.1% and is poised for another negative print (forecast consensus of -0.2%), which would confirm a technical recession.

Particularly, manufacturing has shown weakness, which accounts for a quarter of the German economy.  Factory activity shrank at the fastest pace since the financial crisis. Business expectations across the EU fell to their lowest levels in a decade.

This is a bad omen for the eurozone.  If the strongest component of the financial system is in contraction, how long before the rest of the countries are as well?  And Brexit could very well tip the UK into a recession as well.

Things across the pond are not exactly rosy right now.  Even with massive ECB intervention, it’s tough to move into riskier assets when the economy is contracting, which means rates are likely to remain low.    That should help keep a lid on US rates. 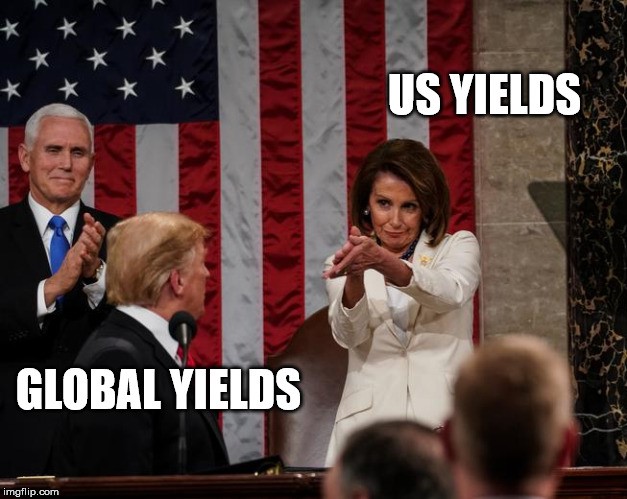 The US continues to look great relative to the rest of the developed world.  This will be one the biggest drags on domestic yields.

After weeks of historically high volatility, the 10T finally settled in a bit and is firmly in the middle of the 1.50% – 1.90% range.

BNP Paribas’ RSI suggests the current level of 1.68% is about right.

Of note, however, is that net shorts on across all rates dropped to their lowest level since January 2018.

Absent other news, there isn’t a lot of technical reasons for rates to rise with this sort of positioning. 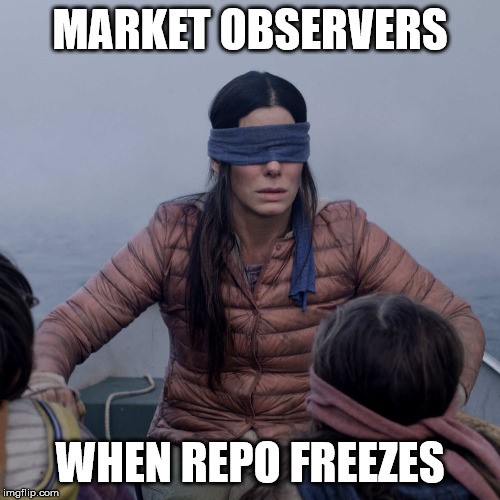 The Fed is back in the Quantitative Easing business, even if it refuses to call it that.  And while markets seem to have settled, anytime the Fed has to jump in and provide $100B a day in liquidity, I’m reluctant to give the “all clear” sign.

For anyone that tells me how the Treasury auctions and tax bills are to blame, I would like to ask you – why hasn’t the Fed been able to cease the emergency measures?

If that theory was true, wouldn’t the Fed have been able to pull back by now?

To be clear, I’m not suggesting we are in the early stages of a full blow liquidity crisis.

But something is amiss that can’t be explained away by Treasury auction settlements and corporate tax bills. 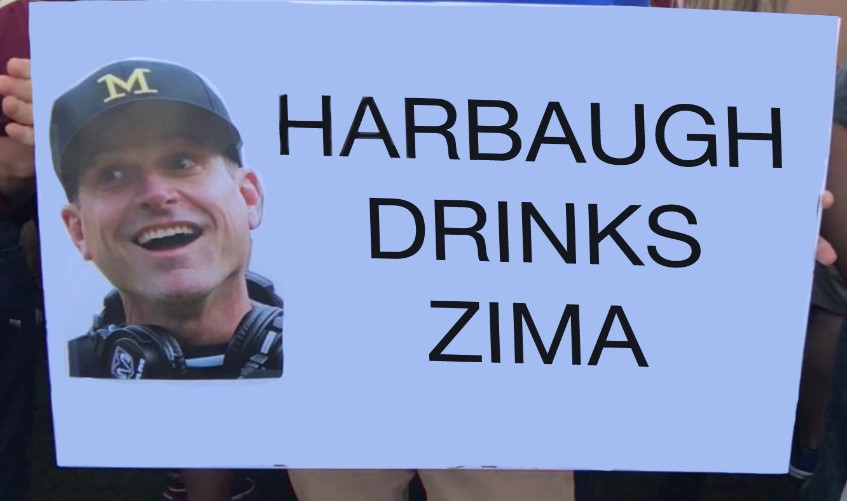 I don’t have an explanation of how Harbaugh has any correlation with interest rates, I just wanted to show off the ESPN College Gameday sign I made a few years ago when we went to the PSU whiteout game against Michigan.  That was Saquon’s coming out party for most of the country and PSU won 42-13 for anyone that’s interested…

Fed speakers, manufacturing data, and most importantly Friday’s job data will be the daily market movers.  It will also be interesting to monitor the repo market issues.  Good luck out there. 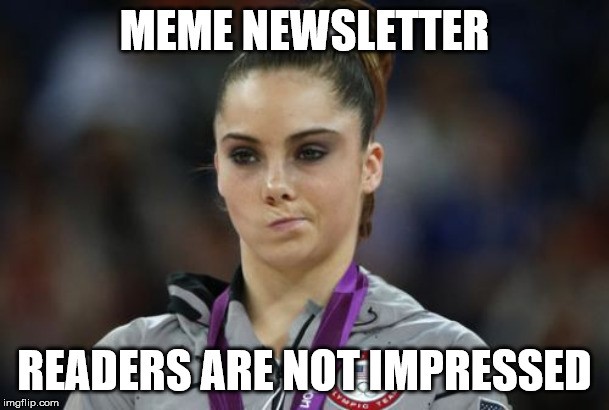