Five Reasons Why Inflation Isn’t as Bad as it Appears

We helped our son with one of his college essays. He chose to write about his recent skydiving experience.  “My dad woke me up on a beautiful Saturday afternoon…”

Biden’s got quite the mess on his hands, doesn’t he?  With inflation surging to its highest level in 30 years, consumer sentiment is plunging, dragging his approval ratings down with it.  The University of Michigan’s Sentiment Index, despite being fresh off another W gifted by James Franklin, is lower than at any point during Covid.  Think about that – people feel worse about stuff costing more than a global pandemic.

The front end of the curve has spiked, causing cap pricing to go haywire.  The 2 Year Treasury is most closely impacted by monetary policy and it has surged above 0.50%.  This implies the market expects LIBOR/SOFR to average 0.50% over the next two years, which really means it expects floating rates to be around 1.00% at the end of those two years.  The market is pricing in four hikes by the end of 2023 even though the Fed’s official stance is no hikes through 2023.

Is the Fed asleep at the wheel?  I don’t think so, and here are my top 5 reasons why.

I know less about shipping than Coach Franklin knows about 4th down play calling, but it’s clear there’s a logjam at major ports.  LA, in particular, has made headlines with record breaking number of ships parked off the coast.

But the Baltic Dry Index, one measure of supply and demand for shipping capacity, suggests the worse may be behind us.  It surged this year to decade high levels…

But has retraced 50% since October 7th.

Here’s the same graph, with CPI overlaid.  Give it some time and CPI can follow it lower.

With the holidays ahead of us, I’m not ready to say “inflation just peaked!”.  In fact, we may see a print above 7% before all is said and done.  But unlike Penn State’s season, at least there’s a light at the end of the tunnel.

Traditional inflation arises from excess demand, which can be represented by GDP.  The economy fell off a cliff, and then snapped back incredibly quickly.  GDP plunged, then spiked.

The Wells Fargo econ team put out an interesting piece this week that suggests GDP has not quite rebounded to its pre-Covid trajectory.  In other words, GDP has not spiked to a level that suggests the economy is overheating – we’re just trying to get back to where we would have been otherwise.

Hiking rates can’t solve supply chain disruptions.  The ships off the coast of LA don’t suddenly get waved in (get it?) if the Fed hikes.

The 4-5mm Americans still without jobs don’t suddenly find work with rate hikes.  And they wouldn’t get the 6mm others to start looking.

Monetary policy can influence prices at the pump, but are far less to blame than OPEC supply restrictions.  Hiking rates won’t suddenly cause a surge in oil supply, bringing down prices.

We are experiencing a supply shortage that monetary policy can’t fix.  In fact, hiking rates could actually make things worse, not better.

#4 – Expectations Aren’t Out of Control

If the Fed is asleep at the wheel, why isn’t the 10T spiking?  No one has more to lose from runaway inflation than the holder of a 10 Year Treasury, and yet it’s struggling to break 1.62%.  Why isn’t it being dumped faster than PSU should dump James Franklin?

Even though inflation has taken over nearly every news story recently, longer term inflation expectations aren’t really spiraling out of control.  That same University of Michigan survey asks respondents about expectations for inflation 5-10 years from today.  That level is 2.9%, which is just a touch higher than the twenty year average of 2.8%.

That being said, the Fed does have expectation issues over the near term.  Businesses surveyed about pricing expectations one year ahead expect continued upward pressure, but I don’t think rate hikes would pull those expectations down.  Resolving supply chain and labor market issues will.

“Base effects” refers to the impact of measuring against the previous year.  During normal times, base effects are muted.  Things just generally chug along.

But when things go haywire, base effects have a much bigger impact.  We felt this in the spring, when we were comparing y/y numbers to the prior April.  Everything feels like a huge spike when compared to insane April 2020 numbers.

To a lesser extent, the same will happen next year – just in the opposite direction.  The readings this year are elevated because of how far things plunged last year.  Next year, base effects will pull readings down when measured against the current elevated levels.

The Fed knows this and it’s part of the reason it switched to the Flexible Average Interest Rate Targeting.  Viewing inflation over a longer timeline allows base effects to wash out over time.

But Just In Case I’m Wrong…

One area where rate hikes could help reign in surging prices would be those sectors most sensitive to interest rates, such as real estate.

Since April of this year, the percentage contribution of shelter costs to inflation has more than doubled from 6.40% to a 10-year high of 13.60%.

Would a hike or two help cool off housing?  Maybe.

But the Fed wouldn’t know whether it worked for quite some time, and in the interim may jeopardize the recovery.  When in doubt, the Fed will err on the side of caution.

One thing the Fed could do is talk about increasing the pace of tapering.   Rather than wrapping up in June, it might wrap up in April.  Or simply stop suggesting a gap in time between tapering and hiking.  That would pull forward the timeline for the first hike.

I can imagine a scenario where liftoff occurs sooner, but with a more shallow trajectory.  This is similar to what the market has priced in.  Note how the market expects the Fed to hike sooner, but ultimately leveling off around 1.50%.

Powell is in a tricky spot.  Thankfully, he’s as secure in his position as a Penn State football coach with 8 straight losses to top 10 teams…

Will Powell Be Renominated?

Biden interviewed Fed Governor Lael Brainard last week as a candidate to replace Powell.  Betting markets give Brainard about a 28% chance of being nominated right now vs Powell’s 71% chance. 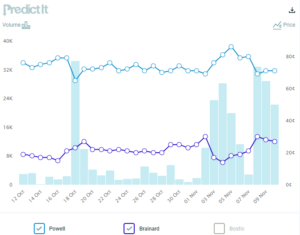 I don’t see it.  The markets like Powell and Biden already has plenty on his plate.  How much more dovish do Dems want an FOMC Chair to be?

The most likely scenario is that Brainard is named the Vice Chair of Supervision.  She has been a vocal dissent on regulatory issues over the last three years, with 23 dissenting votes.  Putting her in charge of the banks may appease Elizabeth Warren without upsetting markets by removing Powell.

Far less economic data this week, but retail sales may provide some insight into the demand/supply question.