Powell has begun using the word “nimble” in a lot of his statements and it’s a fair assessment of how the Fed will need to react this year.  They are going to have an incredibly tricky job in the months ahead.

In the span of six weeks, the Fed doubled the pace of QE, increased the anticipated number of hikes, and pulled forward the start of those hikes by nearly a year.  There’s even chatter about when it will be appropriate to shrink the balance sheet, which typically doesn’t begin until years after the first hike.

On December 1, there was less than 1% chance of a rate hike in March.  Now, markets are pricing in a 97% probability of a hike.  Heck, there’s about a 5% chance of a 0.50% hike.  In total, markets are now pricing in four hikes this year.  That would put floating rates around 1.0% by year end.

Economists expect the Fed to reduce the balance sheet by $2T over the next two years.  Whether or not the Fed is able to pull that off remains to be seen, but that should apply upward technical pressure on yields.

I get it, inflation feels rampant and omicron may extend the supply chain disruptions.  But is this change too much too fast?

“The Federal Reserve has moved from being patient to panicking on inflation in a record period of time,” Diane Swonk, chief economist at Grant Thornton LLP, said in a survey response. “This is the first time that the Fed has chased instead of pre-empted inflation since the 1980s. The risk is that they overshoot and get overzealous on the fight against inflation — and hit the brakes too hard on monetary policy.” 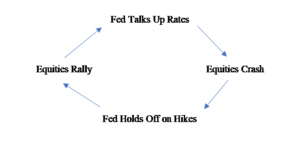 With GDP and inflation expected to fade over 2022, how much can the Fed really afford to hike this year?  As we sit here today, talk of four hikes doesn’t feel overdone.  But what if inflation is trending towards 3% in the first half of the year?  Or if omicron dampens consumer spending and hiring?  China is cutting, not hiking, rates – how could its slowdown impact us here?

The market is still largely sanguine on inflation beyond this year, with 10 year inflation expectations falling from 2.75% to 2.37% in the last two months.

The market is pricing in a more aggressive rate tightening cycle coupled with falling inflation.  The curve should flatten and we may be talking about an inverted yield curve and possible recession by year end.

Crazy busy week.  In addition to the FOMC meeting, we get Q4 GDP and Core PCE.