I have such a crush on Texas. My last trip pre-covid was Texas, and last week I circled back with my first true post-covid roadshow. Unfortunately, lending markets were just as murky as they were two years ago. Some quick takeaways from my discussions:

I think lenders are just spooked right now. Six months ago, the Fed wasn’t hiking at all this year, SOFR was 0%, and the 10T was 1.50%. Two weeks ago, the Fed suggested it might hike 3% this year and the T10 was 3.13%. How do you underwrite a deal in that environment?

If and when volatility settles down, debt markets will follow.

Is the Bottom Falling Out?

Stocks are flirting with official bear territory, which is generally a 20% correction. Unfortunately, that’s usually just the threshold and the drop is far worse. 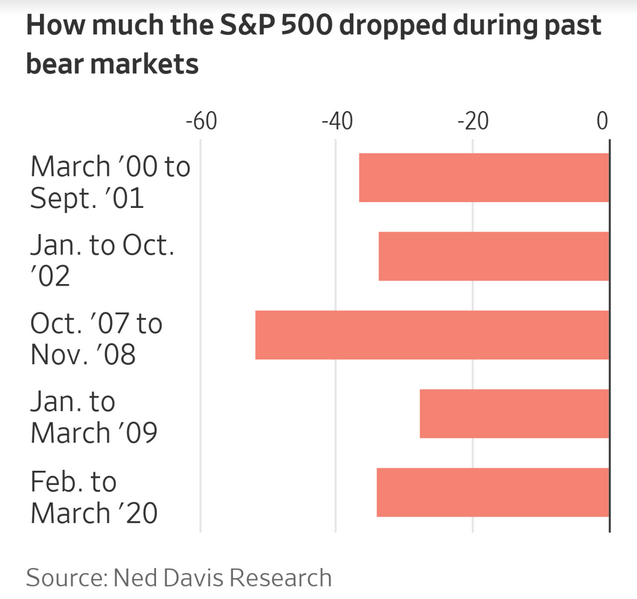 The biggest reason for the selloff? The Fed. 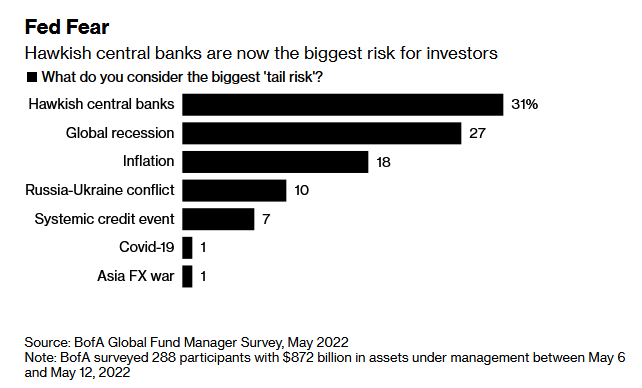 Europe is in or about to be in a recession.

China is cutting rates to fend off its slowest growth in over 40 years.

But here’s the real reason the market is in such panic…I included this concept last week, but it’s probably the most important thing to keep in mind as we plow ahead this year.

When the economy turns south…when the markets tank…when unemployment spikes…the Fed bails us out with accommodation.

But now they are actively tightening as we move into restrictive territory.

And they have no choice as long as inflation remains elevated. Inflation, fueled by ongoing supply chain issues, China’s zero covid policy shutdowns, and Russia’s invasion of Ukraine, has been remarkably resilient. The Fed has to break its back. 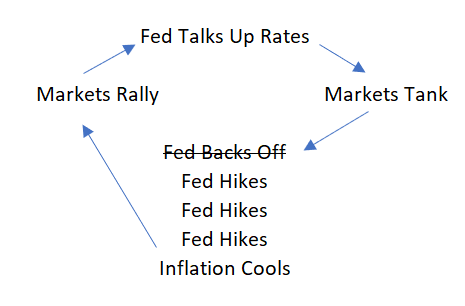 The more hikes it takes to drive inflation lower, the more likely we are to find ourselves in a recession. Or, the deeper the recession.

How the next two years go will be largely dependent on how inflation behaves over the next 3-6 months.

In a more normal cycle, there would already be chatter about the Fed backing off the hikes. But it can’t right now because of inflation.

I think the next two meetings are nearly 100% likely to be 50bps hikes because the Fed has a meeting June 15th and July 27th. The July Core PCE will come out July 29th, two days after the Fed meeting. That means they only have this Friday and the June 30th Core PCE report to go off of over the next two meetings.

Despite markets tanking, Powell won’t change course until he sees a reassuring trend lower of inflation. “What we need to see is inflation coming down in a clear and convincing way, and we’re going to keep pushing until we see that,” Powell said in an interview last week.

Plus, we are starting from a position of strength, with the economy doing very well (much better than markets). With unemployment near all time lows, a huge amount of job openings, and far more cushion in the bank than most previous cycles, Powell will stay the course with at least two more 50bps hikes.

I think the economy can handle that. The seizure right now is in markets, not the economy. There’s a difference.

But after that, I think Powell is desperately hoping inflation has established a nice trend lower because the economy probably can’t handle 3.0%. And certainly not for any period of time.

Here’s Core PCE, the Fed’s preferred measure of inflation. Do you see that tiny dip at the last reading? That was the first drop in 15 months. Will that trend continue?

Friday’s Core PCE is forecasted to come down to 4.9% (down from 5.2% last month). Simplistically, here’s the likely market reaction depending on how it shakes out:

Powell is hoping the all the saber-rattling hawkish rhetoric will actually work.

But like my mentor used to say, “Hope is a terrible hedge.”

Thursday and Friday should be interesting.

Wednesday brings FOMC Minutes, so we get a glimpse into the chatter amongst Fed officials.

But really, all eyes are on Thursday and Friday’s inflation data.