How Does the Yield Curve Behave After a Recession?

I love my daughters.  And I love them even more when they are away at college.  But they are home this weekend, bored by the isolation at college.  I keep asking, “I thought the point of college was to learn, can’t you stay there and do that?”  They pushed back.  I got overruled by the wife.  They came home.

They would both major in activism if they could.  You can probably guess their feelings about Trump.  I posed a question to them.

If you could wave a magic wand and not a single person more would die of covid, but Donald Trump would win in November, would you do it?

I could see the hamster on the wheel inside their heads putting down his pumpkin spice mocha chatte latte and breaking from his 13 hour uninterrupted insta session and start trotting, running the calculations.  The uncomfortable kind of calculations.  That was the point, after all.

They both said, No.  The cost outweighs the benefits.  I pointed out that it might be another 60,000 US deaths between now and election day.

Gulp.  But their answer remained the same.  Keep in mind, the scenario didn’t say Trump would lose if they didn’t choose to use their magic wand.  That means they’re willing to tolerate perhaps another 60k deaths just for the chance to unseat him.

I then asked, “Would your answer change if one of those 60,000 was an immediate family member?”

“Which family member?” they both asked, glaring directly at me.  Now I was the one gulping.

They did, however, change their answer if it affected them.  They would wave the magic wand if it meant saving (most) family members.  When it effects us directly, it matters more.

I think this is the challenge heading into the election cycle.  Can we consider others, and not just ourselves, when we cast our vote?  Can we cast a vote for the best direction of the country, even if it might set us back personally?  Republicans aren’t off the hook, either.  What would your answer be if a Biden victory saved lives?  Would you risk 60,000 American lives just for a 50/50 shot at a Trump win?

I don’t recall a time when our own identity was so thoroughly wrapped up in our party affiliation that we were willing to jeopardize American lives if it meant our candidate won.  Is this really what we have become?

If my daughters do the same, I will be proud of their vote.  But I still hope they cast it from school.

The headline job gain was reasonably strong, but 238k of those were temporary Census workers that will be wrapping up in about a month.  Government jobs were 25% of all hires, totaling 344k jobs gained.

Food services hiring has slowed from 1.5mm in June, to 525k in July, to 134k in August.  I don’t know how policy makers can insist on reduced capacity (or total closures) without providing assistance.  Stop treating all businesses the same and provide targeted subsidies to those that need it the most.  I get really riled up thinking about a politician comfortably collecting a paycheck while forcing a hotel, restaurant or movie theater to close.

Even my grandmother in central PA knows that an inverted yield curve does a pretty good job of predicting a recession.  I started writing about it forecasting a recession in early 2018.  Heck, a few weeks ago I wrote that I did not expect a negative 10T because that would imply another inversion, which I don’t expect to happen.

We spent a lot of time talking about how the yield curve can predict a recession, but how does it behave after a recession?

In fact, the yield curve usually begins to steepen during the recession. Take a look at the steepness over the last 20 years.

Now, you might point out that steepness measures the spread between the two, not the absolute level of yields.  The yield curve could steepen by the 2T falling to 0% and the 10T falling to 0.65%.  Both fell, but the delta between them widened.  That’s fair.  In fact, a lot of that steepness in the previous cycles was the result of the 2T falling faster than the 10T (aka bull steepener for those trying to impress someone on a quarantine dating app – 60% of the time, it works every time).

But the 2T is directly controlled by FOMC policy, and we know the Fed is on hold for the foreseeable future.

That suggests any steepening will be caused by movements in the 10T.

When the long end rises faster than the front end, that’s called a bear steepener.  In the last two cycles, the yield curve steepened to almost 2.0% within a year of the recession beginning. 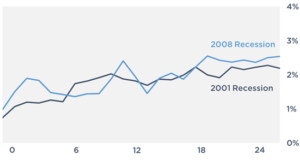 If we apply the path of the yield curve during the last two recessions to the current one, we might expect some upward pressure on the 10T over the next six months.  This graph is still a measure of steepness, not the actual 10T yield, so a 1.00% steepness implies the 10T is 1.00% higher than the 2T.

Using the previous cycles as our guide and making the movements proportionate, the yield curve would steepen to about 1.00% by year end and the 10T would be around 1.15%. 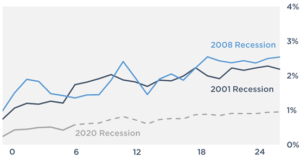 A higher T10, but not dramatically higher.  At least over the next two years.

Remember, this is the measure between the 10T and the 2T, which means they might move up and down, but we are focused on the delta between the two.

But with the Fed keeping the front end anchored for the foreseeable future, any steepening likely has to come from the 10T moving higher.

Relatively light week for data and the Fed will go quiet ahead of its meeting next week.