On January 24th this year, one of my best friends from my Army days burned in on a freefall training exercise in Arizona.  He had seven deployments to Afghanistan and Iraq that the Army will publicly acknowledge.  Over the last 12 years, he was a Delta Operator and, of course, the Army claims he hasn’t deployed since 2005.  He faced countless direct contact missions and it’s a training exercise on a stateside rotation that gets him – unbelievable.

I was with him in Savannah the night he met his wife.  She endured 20 years of active duty service and numerous deployments while raising four kids.  She is still waiting to bury him in Arlington.  Memorial Day is about remembering those that made the ultimate sacrifice as well as those they left behind.  And I am grateful for their service.

Last week I speculated that 3.05% was the new floor and the T10 was likely going to move towards 3.25% in the coming months.

While I figured there could be some retracement from profit taking, I didn’t expect a 2.93% T10 by week end.

I also hadn’t envisioned the Bund dropping 0.20% in a week on the back of an Italian election crisis.

The plunge in yields was almost solely attributable to the 20bps drop in the German bund, as the chaos in Italy caused a fight to safety.  The bund yield plunged, pulling the 10 Year Treasury with it.

Italian debt went the opposite direction as holders processed the possibility of default.  If the 5 Star Movement wins control and Italy exits the eurozone, then Draghi/ECB/German backstop is meaningless.

Let’s use graphs to help illustrate the effects.  Check out how much the Italian 10 year bond spiked. 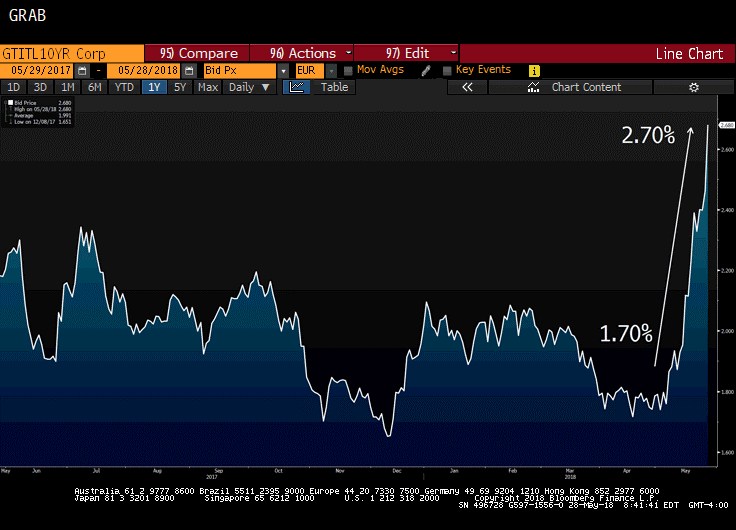 Perhaps a better proxy for default is the 2 year bond, which is up over 100bps. 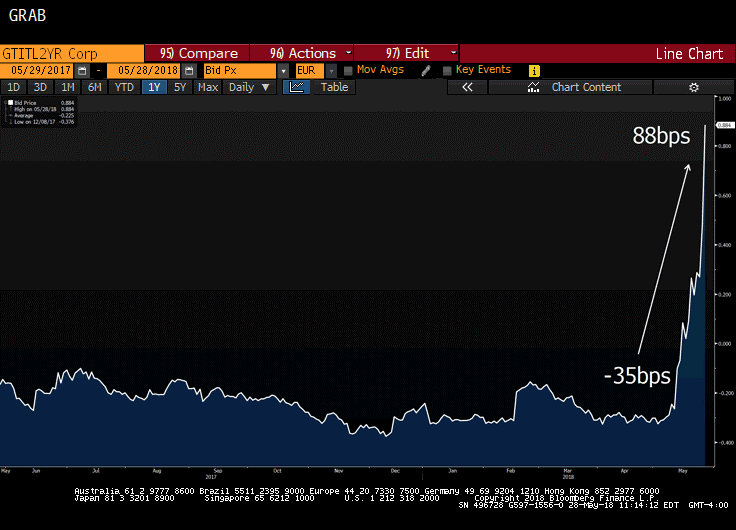 Check out the Credit Default Swap (CDS) market on Italian bonds which has doubled recently. 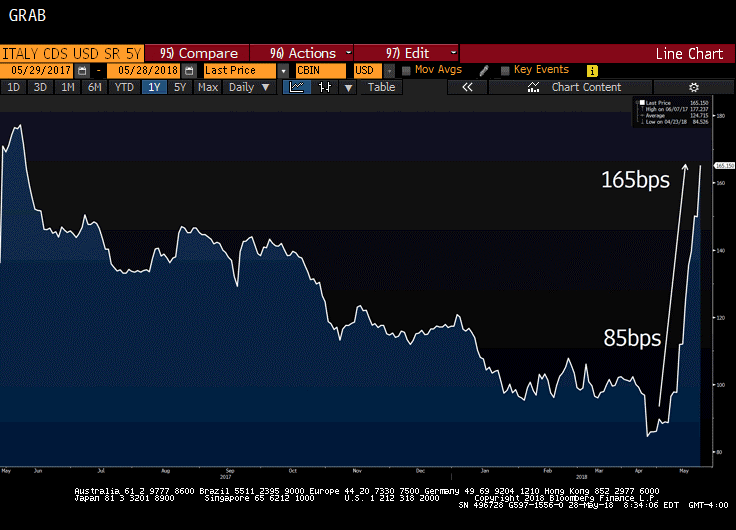 The Eurozone pain doesn’t stop there.  Movements like this tend to spook the market as investors start abandoning ship before the shoe drops on the next country.  For example, Portugal and Spain represent a combination of size and debt load that will impact markets as investors dump holdings.

Check out the spike in Spanish 2 year bonds. 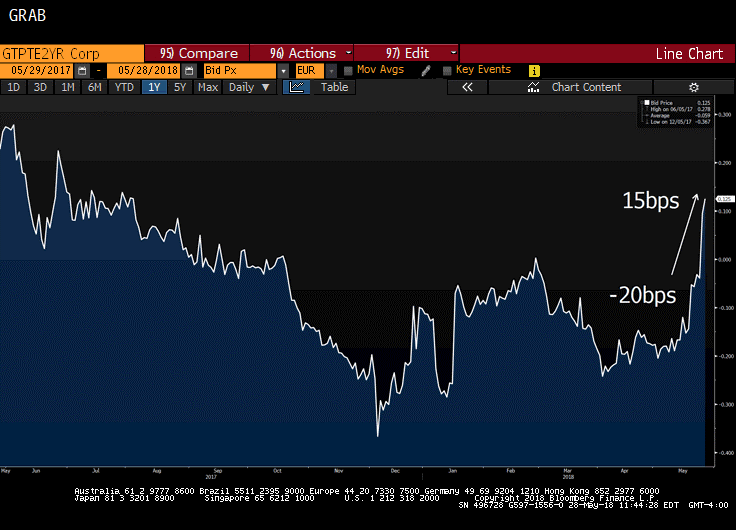 The response in the mattress countries, Germany and the US, is the opposite.  With money flowing to safety, yields there come down. 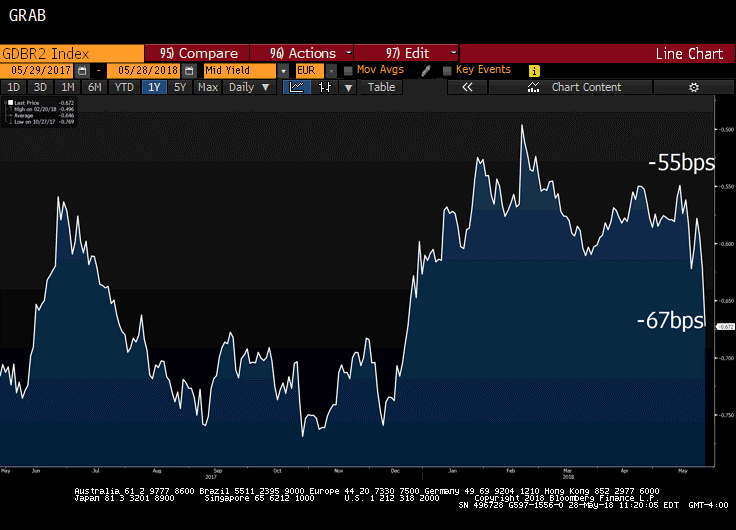 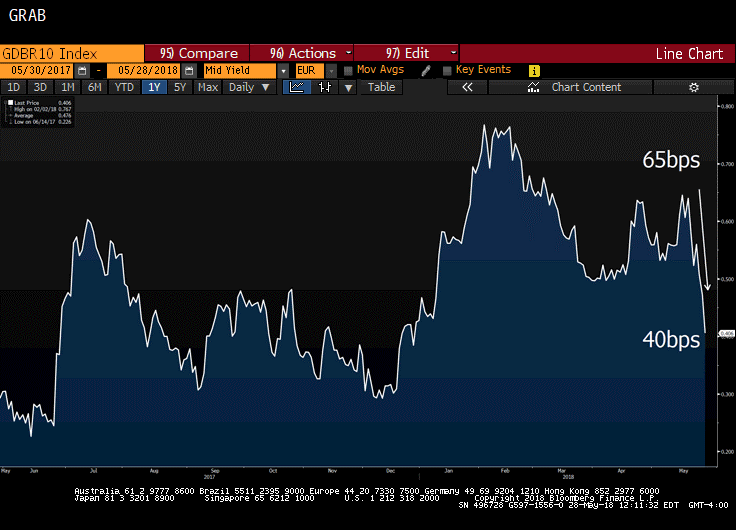 Let’s zoom in to the last month and note the plunge in yields Tuesday/Wednesday given the chaos in Italy. 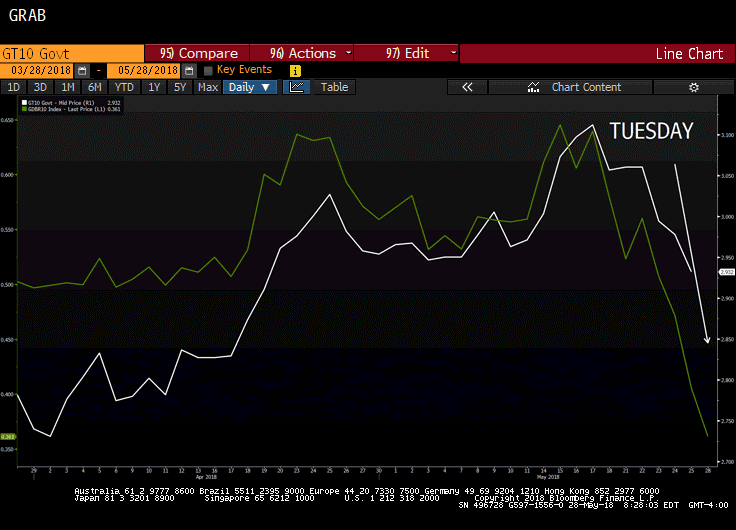 Many of us remember the Eurozone crisis of 2012.  In September of that year, the ECB soothed markets by committing to backstop all debt.  Draghi resolved to protect the euro at all costs.  The ECB became the guarantor of all eurozone debt (which is why Italian bonds can still trade at a lower yield than UST’s).

One notable difference this time around is the threat of exit from the union.  Italy, Spain, France, Greece etc have all considered following in England’s Brexit.

If Italy leaves the euro, then the ECB can’t backstop the debt…and then we will see real panic.

Normally, the headline of the week would be the Core PCE data and the implications it has on Fed policy.  But this week, very little will matter with the threat of a eurozone meltdown.

It will be interesting to hear this week’s Fed speakers address the concerns and whether it will cause them to rethink the current path of Fed Funds.  It seems unlikely the Fed will pause in June, but a continued market meltdown will likely force them to revisit the pace of hikes over the next 18 months.