I have an unconditional hatred of Boston sports teams. The city is amazing. The people are amazing. But those teams…Pats are God Tier hatred (see Cowboys and Duke). Celtics are Rational Level of Intense Hatred Tier. Sawx are less lovable than 15 years ago, but more like a typical rivalry. The Bruins were a thorn in my side growing up, but not like the Devils. It probably has a soccer team I don’t know about.

We took our three boys to visit Boston last weekend. We had an incredible time. The history. The food. It’s beautiful and walkable. Duck Boat Tour. Just an all around great trip.

We arrived the morning after the Celtics had just lost to the Warriors in the NBA Finals. Our boys are casual Warriors fans because Steph Curry used to live in our neighborhood and because they win more often than the Sixers. Two of the boys decided to rock their Warriors gear, while the third wore his Eagles jersey (February 4, 2018: 41-33). As the boys would say…disrespectful.

On a whim, we took them to Fenway Saturday night. Random game against the Cards. It was cold, windy, and the Sawx were getting shelled 10-2 after six innings. It was late and we didn’t have a vested interest in either team, so we took off. After we got back to the hotel, I said, “Shoot, we forgot to stay until Sweet Caroline!” I had totally forgotten and we would have only needed to stay one more inning. Oh well, maybe next time…

The next morning, I get a message from my mom. “Did you get to see Neil Diamond sing Sweet Caroline at the game!?!?!” At first I just thought she meant the song, so I said we had left too early. But she said, “No, Neil Diamond himself was there and led the ballpark in Sweet Caroline.”

I Googled it. She was right. Neil Diamond has twice before sang Sweet Caroline at Fenway, the most recent of which was right after the Boston Marathon Bombings. Heck, he retired four years ago.

And he sang it Saturday night…about 30 minutes after we left.

And it was totally worth it.

The Fed’s preferred measure of inflation, Core PCE, is due out Thursday. Normally, we focus on the y/y change. It peaked in February at 5.3% and has worked its way down to 4.9%. The consensus forecast this week is a slightly further decline to 4.8%. That’s good news, right?

But…monthly data is more important to the Fed’s decisions right now. Is inflation accelerating or decelerating?

If consensus forecasts are correct, it is accelerating again to 0.4%. Coincidentally, the average monthly increase has been 0.4%, reinforcing the notion that the Fed’s current decisions might be impacting expectations and markets, but will take a significant amount of time to filter through to the underlying economy.

While the last three months have shown glimpses of hope, a 0.4% print would suggest an acceleration back to year end levels. This means the Fed can not change its tune on inflation yet.

Between losses to Ohio State and underperforming in bowl games, the University of Michigan surveys consumers about inflation expectations and overall sentiment. Last month, “longer run” inflation expectations (generally viewed as 5-10 years) set a 14 year high of 3.3%. In a glimpse of how depressing the current environment is, a revision down to 3.1% moved markets Friday. Yay? 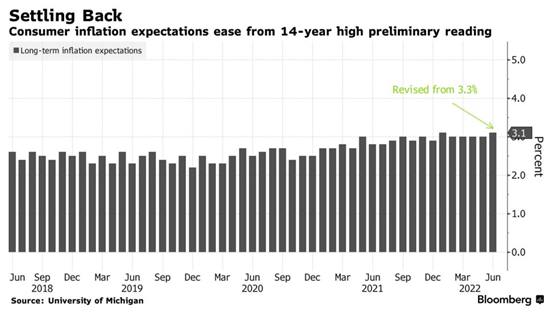 During his semi-annual testimony to Congress last week, Powell said the Fed’s fight against inflation is “unconditional” while finally admitting recession is “certainly a possibility.”

If there has been any doubt about whether the Fed would change course if data weakened while inflation remained elevated, that doubt has been erased. "We can't fail on this: we really have to get inflation down to 2%," Powell said.

By some measures, the Fed’s actions are having the intended effect already. Look how sharply market expectations for inflation have plunged since the first hike in March. This is exactly what the Fed hoped for.

But…Powell can’t change his tune on inflation yet. If he were to say, “Looks like expectations are coming down nicely, the labor market is starting to show signs of cooling, and GDP is clearly slowing, so we are going to be more measured with our hikes…” the expectations could surge again, erasing the gains made thus far.

This is the dilemma the Fed finds itself in right now. Since March, it is winning the war on inflation expectations while actual inflation continues to come in hot. This month’s inflation was set into motion last year.

If inflation surprises to the upside this week, markets will puke. It will suggest the Fed is boxed into a corner to keep hiking regardless of deteriorating economic conditions. Lower rates, lower stocks.

Here’s current market expectations for SOFR at each of the remaining 4 FOMC meetings this year (Forward Curve). 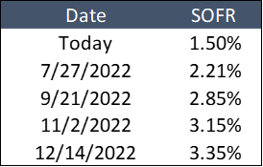 Fed forward guidance is doing a good job of driving down inflation expectations, but will take time to work its way through the system. What would it take for the Fed to begin easing off the brakes?

At an absolute minimum, a leveling off of monthly inflationary data.

The last CPI data came out 3 days ahead of the FOMC meeting and is likely to blame for the 75bps hike (rather than 50bps). This means the Fed is very sensitive to month to month changes and this means the market will be as well. Expect even greater volatility in cap prices around inflation data prints.

As you know, we’ve believe 3.25% is the key level on the 10 Year Treasury. 10 days ago, it was 3.28% and I wondered whether it would hold as the new floor or break and become the ceiling again. It broke, and the 10T promptly dove to 3.00%. On Friday, it climbed again and we may test this critical level once again.

The two most likely reasons for the 10 Year Treasury to break through 3.25%:

Not a Matter of If, But When

With each passing month of rising inflation, the odds of a soft landing grow smaller and smaller. I simply don’t see how we avoid a recession. It’s really a matter how deep will it be.

Rates and commodities play a vital role in economic conditions. Very simplistically, when only one goes up, we have an opportunity to avoid a recession.

But when they both go up, we have a recession.

Even this state school kid can connect those dots.

The yield curve (Inverted Yield Curve) is sending recession signals almost as strong as it did in 2006 and 2019.

Even if Powell secretly believes a recession is the most likely outcome from all of this tightening, he can’t admit that right now.

Everything’s fine, just reining in inflation while the rest of the economy keeps on chugging along…

I can’t let you go out like that – I’m a silver lining kind of guy! Must be all my years of training as a die-hard Philly sports fan. Despite spending this year barreling towards restrictive territory, Financial Conditions are showing signs of leveling off.

If all the buttons the Fed presses are inputs, Financial Conditions is the output. The mere fact that conditions have stopped spiking is good news. See!? I told you I’m a silver lining kind of guy!

Housing data at the start of the week, then GDP. But like I said before, those almost don’t matter right now.