As the discontinuation of LIBOR heats up, another index has entered the market as a potential substitute.  Bloomberg’s Short-Term Bank Yield Index (BSBY) has begun to make its way into loan docs by at least one lender.

BSBY is an index calculated and published by Bloomberg as an alternative to SOFR.  Where SOFR is based on overnight borrowing secured by Treasurys, BSBY is a credit sensitive rate based on data from global bank wholesale funding (wholesale deposits, CDs, commercial paper, and short term bonds).  BSBY defines a forward term structure and since it incorporates bank credit spreads, it does not require a spread adjustment like SOFR.

In other words, BSBY is similar to LIBOR in that it’s an unsecured forward looking (known at the beginning of the period) borrowing rate.  However, in lieu of polling panel banks to determine the rate, it’s based on actual data from market transactions making it less susceptible to manipulation.

I thought we were transitioning to SOFR?  Which is it?

While publications related to LIBOR’s discontinuation typically mention SOFR, Bloomberg’s BSBY, the AFX’s Ameribor, and ICE’s Bank Yield Index are other contenders which could become more common.  In November 2020, regulators issued a statement indicating they would not endorse a specific replacement and would allow banks to use any reference rate deemed appropriate for their business and needs.  You can read that publication here.

If you’re wondering whether we’re heading towards a market which has multiple borrowing indices, you would be correct.  Our guess is a couple rates will be most common but it’s unlikely there’s just one standard index going forward.

How correlated are BSBY and LIBOR?

The correlation between the two rates is actually pretty high.  When considering the preceding three years, 1-month BSBY is actually more correlated with LIBOR than overnight SOFR.

Could BSBY decouple from the other indices?

Yes.  In times of economic stress where Fed intervention would push repo rates lower (compressing SOFR), BSBY should reflect true costs of bank funding (which may increase).  This is the same sort of disconnect we saw with LIBOR in 2008 following the GFC and in early 2020.  We’ve included a graph from Bloomberg below showing last years divergence.

In other words, the risk associated with BSBY disconnecting from other short term borrowing rates is similar to what you already face with LIBOR. 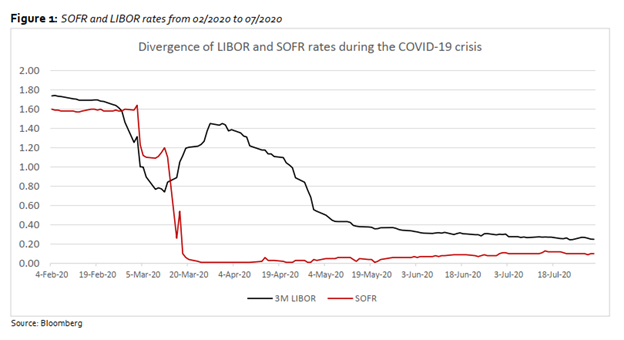 Can I buy BSBY hedges?

Our understanding is that at this time only BofA and PNC are offering BSBY hedges, but other swap dealers are working on building out their models to offer the same.

In May, the CME announced they’ll be launching BSBY futures, which should be available for trading in Q3 with OTC clearing of swaps introduced as soon as Q4.  The availability of BSBY futures and cleared swaps will be in addition to SOFR-based instruments.

Is there a reason I shouldn’t choose BSBY?

Historically, LIBOR, SOFR, BSBY, and even Ameribor, have largely moved in lockstep as shown below.  While we can’t say with certainty what the relationship will look like in the future, the indices should continue to track together, although the Fed may not have total control over the non-SOFR rates.

Currently our biggest concern with choosing BSBY over SOFR is the limited number of options on the hedge front, which could lead to increased transaction costs.  That said, this would subside over time as more providers enter the market, and we can help mitigate the risk by providing transparency. 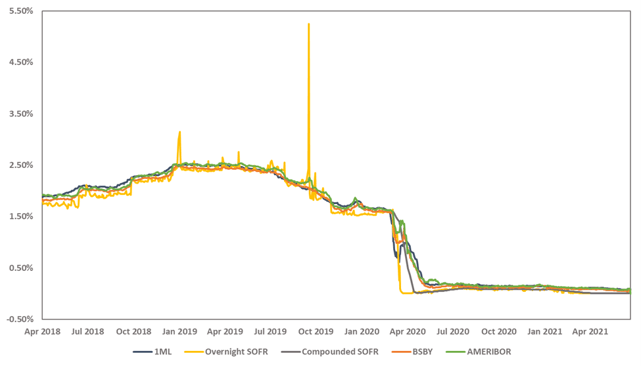 BSBY is highly correlated with LIBOR, viewed favorably as a replacement for LIBOR/alternative to SOFR, based on robust market data, and is unlikely to cease publication.  We suspect BSBY could become more prominent going forward, especially after futures trading begins.

If you have questions or would like help weighing the pros/cons of various loan options, please contact the team at pensfordteam@pensford.com or 704-887-9880.

What’s the difference between SOFR and Term SOFR?