For the third straight year, we spent New Years in Cabo with our kids. It’s warm, beautiful, and disconnected from the real world. It’s the perfect way to recharge and hit the ground running.

But around 10pm this year, we were met with the loudest music I’ve ever heard. It was as loud as any concert I’ve been to. The house was vibrating. It was coming from two houses down and it was a live band…playing…Mexican Polka.

I can’t make that up.

The band’s name is Grupo Diez Diez, which is very reminiscent of the boy band names here. Except they weren’t boys, they were middle aged men. And their lead singer was playing the accordion.

I asked my wife if she thought they would cut out at 2am or 3am. She predicted 12:30am. That gave me hope.

They blasted Mexican polka music at 130 decibels until 7am.

And since I know you don’t believe me that a Mexican Polka boy band exists, I’m including a helpful link so you can bask in the glory that is an accordion. You’re welcome.

The “resilient” job market that means the Fed “still has work to do” is rapidly becoming a major pet peeve. The Phillips Curve totally fell apart over the last decade, but we are suddenly obsessed with job destruction. If inflation hits 2%, do we need job losses? 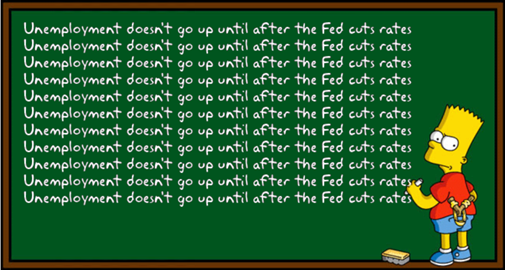 In fact, there is a significant lag between rate hikes and job losses.

There is exactly zero precedent for job losses within the first year after the Fed starts hiking. I wrote about this on December 4th (A Resilient Job Market Doesn’t Normally Dictate FOMC Policy).

In the last four cycles, here’s how job gains looked in the six months leading up to the Fed pause. In the month immediately prior to The Pause™, the economy was adding, on average, 185k jobs.

The Great Rate Hikes of 2022™ will have an impact on the job market, but it takes time. I’m not sure how much, if any, the unemployment rate will climb this year, but I don’t think it should be used as a yardstick for how well the Fed is cooling the economy.

A few months ago, Jay Money suggested Real Fed Funds needs to be “significantly” positive, without defining what that means. My gut is a Real Fed Funds around 1.50% qualifies. If the Fed pauses at 5%, that means Core PCE needs to be 3.50%, which is unlikely to happen in Q1.

But if the forward trend shows inflation pushing lower, the Fed will take this into consideration. If Core PCE is going to hit 3.50%, the Fed can pause before it actually hits 3.5%. At the December meeting, the Fed’s own projections call for Core PCE to hit 3.5% at year end. Using that as a guidepost, here’s what Real Fed Funds might look like this year.

If you’ve started skimming, stop for a moment and make sure you don’t miss this point.

The Fed will update its projections at the March 22nd meeting. If expectations for year end inflation are 4.0% instead of 3.5%, the Fed will hike to 5.5% to make up for that.

In essence, they are solving for a 1.50% Real Fed Funds and working backwards. Whatever they expect for inflation on a forward looking basis will dictate The Pause™.

The big caveat here is no one at the Fed has defined the target Real Fed Funds. If it’s 1.0% or 2.0%, then adjust lower/higher the scenarios above.

But the Fed will be looking forward for guidance on when to pause and ultimately will also ultimately cut rates based on this as well.

Not only did rates climb far more than expected, but markets have no confidence in the future path. We are in unchartered waters. In November 2021, the Fed said it wouldn’t be hiking at all in 2022 and now we are talking about 5% Fed Funds.

Put yourself in a trader’s shoes – you don’t think Fed Funds will go to 6%, but can you rule it out? Can you rule out 7%? So you have to charge for that possibility.

The key to cap costs in 2023 will be The Pause™. Once the Fed pauses, and the market believes the Fed is done for good, cap costs will plunge. The Pause™ will suck the uncertainty premium out of cap costs.

Here’s how cap prices have behaved after The Pause™. Generally, prices fall about 50% three months after the last hike.

After The Pause™, markets will start pricing in The Cuts™, which will further help costs.

This one might not age well, but that has never stopped me before…

Once the Fed pauses, it is typically cutting rates within 9 months. A pause in March could mean a cut in December.

But even if the Fed doesn’t pause in March, the pace of hikes has been so dramatic that there is some chance the cuts will come faster than in previous cycles. If we get to 5% and inflation is plunging by the summer, isn’t there some chance Powell says, “We needed 5% Fed Funds to break inflation, and that has happened. We are going to cut rates by 0.75%. This will keep applying the brakes without driving us off an economic cliff.”

Exhibit A for why the Fed won’t cut this year? Powell would rather deal with economic pain than to allow inflation to become permanently entrenched.

One thing is for sure – just because the Fed isn’t talking about cutting doesn’t mean they won’t cut. They were wrong about hikes in November 2021, and they could be wrong about cuts this year.

In fact, here are some headlines immediately preceding previous rate cuts. My favorite is on 7/19/19, Philly Fed President Harker said there wouldn’t be any rate changes that year, and then 12 days later the Fed cut rates by 0.25%. 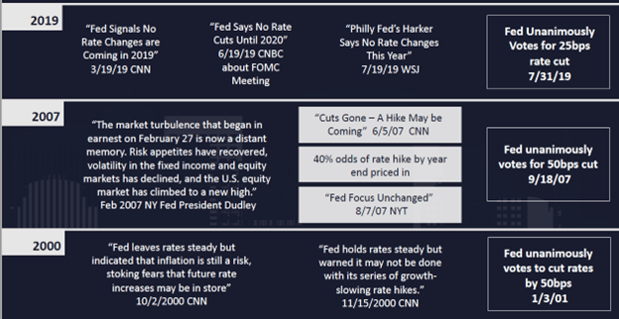 The 10T is already pricing in a recession and rate cuts. If we look at previous cycles, the 10T has always trended lower in the 12 months after The Pause™. In only one scenario, 1994, did the 10T climb by month 24 and that was because the Fed cut 75bps.

If this cycle follows previous cycles, the 10T will be at 3.13% a year after The Pause™ and 2.65% two years after The Pause™. I think the impact will be more dramatic this year because the pace of hikes has been so accelerated.

Lead Pipe Lock #6 – Mexican Polka is Having its Lizzo Moment

You can’t really understand true musical genius until you hear a grown man play an accordion for 9 hours uninterrupted.

Lead Pipe Lock #7 - Imitation is the Sincerest Form of Flattery

JLL Research put out these super cool graphs in late December. They do a great job illustrating how Fed Funds has behaved once the Fed started hiking. 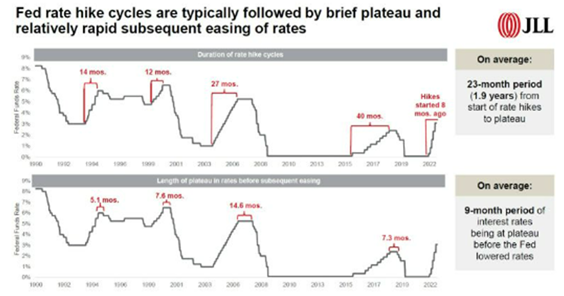 They are so cool, in fact, we created them 11 months ago™. They didn’t even bother trying to change our ugly red lines.

Five years ago, I would have gone Ether on them (5 of you get that reference). But the older, wiser me takes it as a compliment. I’ll just start putting an obnoxious trademark™ on everything we do.

Plus, few people are wrong as often as me, so joke’s on them. Speaking of being wrong a lot…

This is my version of celebrities reading mean tweets about themselves. I just consider it future material for a roast.

Rough start. Inflation finished at 4.7%, but only dipped below 5% the last month of the year. This was worse call than having Urban Meyer teach a class at Ohio State on Character and Leadership.

Core PCE peaked at 5.4% and remain elevated all year. I believed a big chunk of the inflation story was supply chain related, while the Fed believed it was excess demand. So far, it appears the Fed was right.

jk, I avoid crypto talk because I just don’t get it.

(please note: I didn’t say I don’t get the T Swift obsession!)

#3 – “Financial Conditions will tighten but not enter restrictive territory”

Financial conditions spiked dramatically as the Fed hiked much more than expected. We briefly broke into restrictive territory and then eased back. In a normal year, this would be considered an ok prediction. But in 2022, this is the best win I can hope for. The rest are a bloodbath.

I actually said, “In a few weeks we went from no hikes to 4 hikes?  Simma down now…”

That was a worse call than Elon Musk spending $44B on a social media toy.

This was so bad I wouldn’t even get a participation trophy. I haven’t been this wrong since my first marriage, and at least I got three amazing kids out of that.

This is almost as brutal as nominating Herschel Walker for the United State Senate (almost). The 10T peaked at 4.24% in October, just a tad above 2.15%...

I did include two nice CYAs last year for partial credit:

“I see two catalysts for the 10T breaking my year end ceiling:

The market is still not believing the long-term inflation story. If that changes, the 10T can spike.”

The 10T did spike, and far more than I could have imagined.

The market still doesn’t believe inflation is a long-term problem, but it definitely changed its perception of it as a near term issue. Plus, the Fed hiked so much it dragged the 10T higher with it.

Misery loves company! So go listen to that Mexican polka!